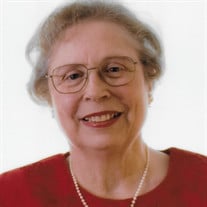 Lauretta Lillian Atkisson Larsen passed away peacefully at home on June 6, 2015, surrounded by family. She was born December 25, 1936 in White Plains, NY to Curtis Trumball Atkisson & Konda Tanner Atkisson. She grew up in Scarsdale, New York and Ann Arbor, Michigan with her three siblings: Curtis Atkisson, Konda Jean Atkisson (who preceded her in passing), and Barbara Lambourne. She met the love of her life, Howard Larsen, at church and soon they began dating. They were married on August 21, 1956 in the Salt Lake City Temple for time and all eternity. Together they raised their four children: Karen, Janet, Ted and Erik in the Seattle area and in Riverside, CA. As a family, they enjoyed the exploration of the nation’s historical sites, cross-country trips and countless camping adventures. She graduated from Brigham Young University with a BA in Education in 1956. She went on to teach elementary school for several years in both California and Washington. Lauretta cherished being an active member of the Hillside Ward of the LDS Church, in Alpine, Utah. She was also an active member of the Daughters of Utah Pioneers and the New Horizons Orchestra, in which she re-learned to play the violin after a 50 year break and surviving brain surgery. Lauretta always had a kind, generous and selfless demeanor. She was often found humming and smiling, while sewing clothes for family and various charities. Children around the world benefitted from her talents and commitment to service. Despite numerous health challenges, she never complained and demonstrated unconditional love to all around her. She is survived by her loving husband of almost 59 years, Howard B. Larsen, her brother Curtis & wife Ann Atkisson and sister Barbara & husband David Lambourne; her daughters Karen & husband Jim Ellis, Janet Robertson; her sons Ted Larsen and Erik & wife Kim Larsen. She took great joy in her grandchildren and great grandchildren. Her grandchildren are Corbin Ellis; Patrick Jr., Michelle, Jessica and Trevor Robertson; Amanda Larsen, Hillary Larsen Davis, Caroline and Audrey Larsen; and Connor Larsen, Mesa Bake, Aspen, Tage and Willow Larsen. Lauretta’s great grandchildren are Shae, Patrick Elijah and Kara Robertson; Gavin Robertson; and Miles Davis. Funeral services will be held on Wednesday June 10, at the Hillside Chapel, located at 676 N Eagle View Dr, Alpine, UT 84004, beginning with a public visitation at 10:00 AM, followed by the service at 11:00 AM. Burial will occur at 3:00 PM at the Ogden City Cemetery, located at 1875 Monroe Blvd, Ogden, Utah.

The family of Lauretta Lillian Atkisson Larsen created this Life Tributes page to make it easy to share your memories.