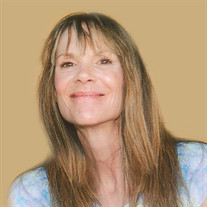 Laurynda Gae Golightly, 62, died in her sleep early Sunday, May 21, 2017, at home after succumbing to prolonged health problems. She was born on March 8, 1955, in Los Angeles, California, and was lovingly adopted by Beverly Keith and Max Chatterton Golightly immediately following her birth. She was sealed to her parents shortly thereafter in the Los Angeles, California LDS Temple. Her birth mother was Georgia Monta Boehme Guintini. She married Randy L Moore and was later divorced. Laury was compassionate, always willing to help others. She loved to laugh, was patient and kind, and her heart was full of forgiveness. She enjoyed music, concerts, her family’s musical talents, raising animals and most of all shopping for clothing and shoes. She is survived by her daughters, Melissa Gae Moore Keith, (married to Alan Keith), Provo; and Mandi Gae Moore Billington, (married to Tom Billington) Spanish Fork; and grandchildren: Kiana Keith Phillips (married to Caleb Phillips), Kameron Keith, Kenzie Keith, and Kody Keith; Kaden Billington, Kailey Billington and Rylan Billington. She is also survived by her four brothers Gary Duane Golightly, Provo; Kim Oliver Golightly (married to Anne Ashworth Golightly), Bethesda, Maryland; Kyle Golightly (married to Michelle Briggs Golightly), Orem; and Guy Golightly (married to Chris Call Golightly), Spanish Fork; and by many nieces, nephews, grand-nieces, grand-nephews and cousins. She also is survived by her half-brother, Steven C. Giuntini, whom she was delighted to discover just a few years ago. She also leaves her dear friend, Mark O’Reilly who has loved and cared for Laury for the last twelve years. She is preceded in death by her parents, Max and Beverly Golightly, by her son, McGavin Lonnie Moore and daughter, Ally Megan. Services will be held on Saturday, May 27, 2017, at 11 a.m. at the Valley View 2nd Ward of The Church of Jesus Christ of Latter-day Saints, 4395 South, Albright Drive, Holladay, Utah. Guests wishing to meet with family may do so beginning at 10:15 am. She will be buried in Mt. Pleasant Cemetery, near her son McGavin, later in the week. The family wishes to thank the members of the Valley View 2nd ward and other friends and neighbors who have been so kind during these last few years.

Laurynda Gae Golightly, 62, died in her sleep early Sunday, May 21, 2017, at home after succumbing to prolonged health problems. She was born on March 8, 1955, in Los Angeles, California, and was lovingly adopted by Beverly Keith and Max Chatterton... View Obituary & Service Information

The family of Laurynda Gae Golightly created this Life Tributes page to make it easy to share your memories.

Laurynda Gae Golightly, 62, died in her sleep early Sunday, May...