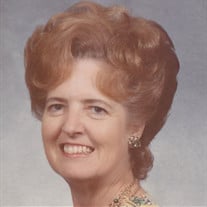 LaVina Joyce Gibson Gunnell (83), our wonderful mother, wife, sister and grandma passed away peacefully on September 15, 2014 in American Fork, Utah. LaVina was born on May 1, 1931 in Alamosa, Colorado, the daughter of Clifford Gustavis Gibson and Birdie Ann Wilson. Her family moved to Durango, Colorado when she was 4 years old. The family then moved to Salt Lake City in December of 1941. She graduated from West High School in Salt Lake City. She started dating Parley P. Gunnell on January 28, 1949. He proposed to her by hiding her ring in the corsage he gave her for Easter. LaVina did not notice the ring, but her sister did! They were married on June 22, 1949 in the Salt Lake LDS Temple. Together they raised four sons, Gary Lee (Susan), Brent Leon (Donna), Kory Jay (Kathy) and Brad Devon (Pam). She has 6 brothers, Wallace (Beth), Clifford (Dorothy), Marvin (Bernice), Ronald (Karen), Russell (Cheri) and David (Connie) as well as 3 sisters, Norma (Leland), Barbara (Donald) & Edith (Norman). She also loved and enjoyed her 16 grandchildren and 14 great-grandchildren. She is survived by her 4 sons, 3 brothers Wallace, Ronald, David and her sisters Barbara and Edith. She was preceded in death by her parents, husband Parley, three brothers, one sister and a grandson, Eric. Funeral services will be held, September 20, 2014 at 10:30 am with a viewing from 9:00am to 10:15 am at Edgemont 2nd Ward, 555 E. 3230 N, Provo. Internment following at Wellsville City Cemetery.

The family of LaVina Joyce Gibson Gunnell created this Life Tributes page to make it easy to share your memories.