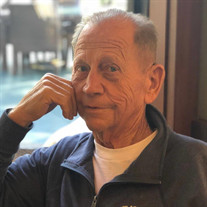 Lawrence Ross (Bud) Webber May 3, 1940 – March 26, 2019 Bud Webber, 78, of Salt Lake City, Utah, and Overton, Nevada, left this world on March 26, 2019 after a courageous battle with cancer, with his loving family by his side. Bud was born in Salt Lake City on May 3, 1940, to Charles Theron Webber and Cora McQuiston Webber third of three children. He attended West High School. Bud married Linda Lee Webber, together they had four children, later divorced. He married his childhood sweetheart, Carol Powell on June 30, 1985, and gained 5 more kids. Later he and Carol adopted one more daughter together. Bud started his career as a driller in 1968 as a partner with J.G. Lee Drilling. Bud eventually started his own company, Webber Drilling in 1973. He was a member and past president of the Utah Ground Water Association. Bud grew up with a love for animals. He was inspired by his affinity for animals which he shared with his children throughout his life. Our Dad was our North Star. He instilled in his children a strong work ethic, integrity, the love of family and most importantly to always “be your word”. There is only one word that comes to mind when describing Bud Webber. Large. He lived life large. His personality was large. His family, his home, his vehicles, his animals, his voice, and most importantly his love, were all large. Bud was a person that you never had to wonder if he meant what he said. While he was larger than life, it was the little details that we’ll miss the most. Like the Bud Webber bullsh*t sparkle that was always in his eye and his hand on your shoulder while he was guiding you through something tough. He was always our big strong cowboy but it never took long to find that he was a big ol’ softy for the ones he loved. He leaves behind his wife of 35 years, Carol; his daughters RoquesAnn Fillerup (Craig), Ronda Larsen (Tom), Samm Webber; Stepchildren, Tamara Pullan, Laurie Montgomery, Kimberly Bender, and Shane Pullan (Sonya). And an Overton mile of loving grandkids and great grandkids. We know that he is raising cane up in heaven with his boys; sons, Rusty and Randee Webber; stepson, Brent Pullan; son in laws, Kevin Bender and Max Montgomery; and happily reunited with his parents and lots of friends. On departing he left a huge void in our lives. We love you. We will be holding a service on Saturday, April 6, 2019 at 11:30 am at The Woods On Ninth at 6775 South 900 East, Midvale, Utah.

The family of Lawrence Ross (Bud) Webber created this Life Tributes page to make it easy to share your memories.