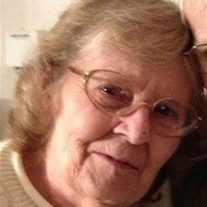 Lenora Joan Brakke, age 85, passed away in West Valley City, UT on the 26 February 2016 of natural causes. She was the oldest child born to Leonard D. and Ruby P. (Ewalt) Smith on 16 December 1930 in Billings, MT. In her youth she attended grade and middle school in Billings and graduated from Senior High School. She met her sweetheart Vernon E. Brakke in the First United Brethren Evangelical Church, Billings, Montana. They were baptized into the LDS church and were sealed in the Idaho Falls, Idaho temple in 1958. Six children were born to this union; Vickie (dec), Dennis (dec), Arleen (James) Young, Terri (Steven) Richins (dec), Dona and Curtis. Through the years, Lenora enjoyed many talents and continually developed many talents which she shared with everyone. She was a perfectionist at all she did whether it be quilting, knitting, crocheting, tole painting, sewing, professional cake decorating and candy making. Too many to mention. But, her favorite was genealogy and family history. She was a 4-H leader for many years for the Darling Dumbells and helped many young ladies learn to love to sew along with her mother. Her favorite flower was Violets and always had lots of them. Lenora was always helping and serving people. And people were drawn to her because of her sweet spirit and love for them and had endless energy to do so. Lenora is survived by her daughter Arleen (Jim) Young and Dona Brakke and 2 sons, Curtis and Shane, 27 grandchildren, many great-grandchildren and one great great grandchild, two sisters; Beverly (Jerry) Graham and Roxana (Dan) Hofferber, and a brother, Louis (Sandy) Smith and numerous nieces and nephews. She was preceded in death by her parents, husband,Vernon, and children,Vickie, Dennis, Terri, a grandson-Kyle W. Brakke and 2 granddaughters, Ketra K. Brakke and Courtney Dawn Young. There are so many left behind who love and will miss her but, we know that we will be with her soon. Services will be…..

Lenora Joan Brakke, age 85, passed away in West Valley City, UT on the 26 February 2016 of natural causes. She was the oldest child born to Leonard D. and Ruby P. (Ewalt) Smith on 16 December 1930 in Billings, MT. In her youth she attended... View Obituary & Service Information

The family of Lenora Joan Brakke created this Life Tributes page to make it easy to share your memories.