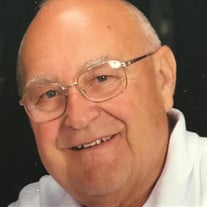 Together again! Our beloved husband, father, pa, son, brother, and friend was reunited with his sweetheart on the morning of Tuesday, August 21, 2018. Leon was born on April 21, 1938 to Don and Leone Bollschweiler Bartholomew who were blessed with three children. He graduated from East High School in 1957 and went on to serve in the US Navy Reserves. He later graduated from LDS Business College. Leon had 2 daughters from a previous marriage. In 1968, Leon met Janice Webb, a widowed mother of 3 children. They joined the 2 families and were married on April 5, 1968. In 1971 they were blessed with a daughter of their own. The marriage was later solemnized on Dec 27, 1979 in the Salt Lake Temple. Leon worked for International Harvester in Salt Lake City, Portland, Oakland, Chicago, and Kansas City. When IH merged with Case, he was transferred to Racine WI. After 35 years of service, he retired in 1992. They moved back to Salt Lake and then Las Vegas. Leon exemplified the very meaning of serving others and following Christ by being a faithful member of the Church of Jesus Christ of Latter-day Saints. He and Jan LOVED Missionary Work. Together they served 2 service missions in Racine, WI and later served a Full-Time Mission in Las Vegas, NV. It gives us great comfort in the knowledge of the gospel they shared, the power of the priesthood, and the atonement of Jesus Christ. Leon was preceded in death by his parents, Don and Leone Bollschweiler Bartholomew, his eternal sweetheart Janice Webb Bartholomew, his brother Fred Bartholomew, and great-grandson Devon Griffiths. He is survived by his children: Cindy (Keith) Griffiths, Ron (Julie), Lori Garcia, Sheri Kesler, Mike (Margret), Paula (Scott) Jorgensen, 23 grandchildren, and 27 great-grandchildren. A viewing has been scheduled for Sat. Aug 25 from 8:30-10:00 AM at the Harvest Hills 8th Ward- 2101 Providence Drive, Saratoga Springs, UT 84045. Funeral Services immediately following at 10:30 am. Interment will take place at Riverton City Cemetery. Flowers may be delivered to the church between 7:30 and 8:30 am, Saturday Aug 25th or between 3:00 and 5:00 pm Friday Aug 24th to Serenity Mortuary, 12278 S Lone Peak Pkwy, Draper, UT 84020. Or in lieu of flowers, donations can be made to your favorite Full-Time Missionary or to the General Missionary Fund for The Church of Jesus Christ of Latter-day Saints As a family, we would like to extend our gratitude to all the friends, neighbors and ward members who have been so supportive through this trying time.

Together again! Our beloved husband, father, pa, son, brother, and friend was reunited with his sweetheart on the morning of Tuesday, August 21, 2018. Leon was born on April 21, 1938 to Don and Leone Bollschweiler Bartholomew who were blessed... View Obituary & Service Information

The family of Leon Mark Bartholomew created this Life Tributes page to make it easy to share your memories.