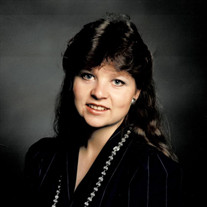 If you wish to attend the service virtually, please follow this link. https://zoom.us/my/sj1meetings?pwd=eXFuTzlKUy9MdGhZUjBPcmF0YjVRdz09 Our beloved wife, mother, daughter, sister, and friend, Leslie Scott Warner, peacefully passed away February 2 at her home in South Jordan, Utah, surrounded by her family. She was born in Salt Lake City, Utah on May 21, 1962 to Rayna Cooper Scott and the late David Randall Scott. She attended Hillcrest and Jordan High Schools where as captain of the gymnastics team she won many all around awards, leading her Jordan High School team to two state championships. In her senior year she earned the scholar/athlete award. She attended BYU on a scholarship where she graduated in Nutrition. A marriage to Paul Eugene Sherrick ended in divorce. She later met and married the love of her life, Merril Joseph Warner, on August 24, 1989. Their marriage was later solemnized in the Salt Lake Temple on December 15, 1990. Twin boys were born to Leslie on her father’s birthday. Four years later another son was born. After she married Merril she quit working as a Temple Consultant at the Church Office Building to become a full time mom. She was a gentle, loving, obedient daughter who was a joy to her family and best friends with her three brothers, giving them advice such as how girls liked to be treated or how to dance. Her home was brightened by her sweet spirit and sense of humor. She loved to babysit and enjoyed sewing her own clothes. She liked cooking and often tried out new recipes. She learned the piano well enough to play hymns. The summer after sixth grade she fell off the horizontal bar and broke her arm. That didn’t stop her from hiking to the top of Mount Timpanogos with her family. She totaled her car rolling off Wasatch Boulevard but walked away without a scratch. One of the activities she enjoyed was the annual spring outings at Capitol Reef National Park with her family and later her extended family. The last 35 years of her life she struggled with multiple sclerosis. Merril became her sole caregiver, researching the disease and lovingly and devotedly caring for her. Even with all her physical problems, she was always upbeat and never complained, but she was always grateful for all her blessings. The happiness of others was important to her, and she always tried to comply with their wishes. As the MS progressed she spent time watching Jeopardy, Wheel of Fortune, Family Feud, and Monk. She enjoyed taking rides with Merril in their Mustang convertible. The two most important things were always her family and the Church. She is survived by her husband Merril and three sons, Bill Sherrick and Scott (Rafaela) Sherrick of Taylorsville, Utah, and Daryl (Kayli) Warner of Lehi, Utah; her mother Rayna Scott; brothers David (Ruth Ann) Scott, Robert (Leslie) Scott, Russell (Teresa) Scott; and many aunts, uncles, nieces and nephews. The family would like to express their appreciation to members of the ward who have been such a support and especially to Leslie’s ministering sister, Modina Hansen, who has been Leslie’s angel here on earth. Funeral services will be held Monday, February 7 at 12:30 p.m. at the South Jordan 1st Ward building, 2450 West 10400 South, South Jordan, Utah. Friends may call at the church prior to services from 11:00 a.m.-12:30 p.m. Please join us through Zoom if you aren't able to make it in person. https://zoom.us/my/sj1meetings?pwd=eXFuTzlKUy9MdGhZUjBPcmF0YjVRdz09

The family of Leslie Scott Warner created this Life Tributes page to make it easy to share your memories.

If you wish to attend the service virtually, please follow this...