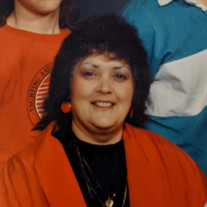 Lily (Rohbock) Carter, age 77 of Orem Utah, left this world on 2 November 2021. Lily was born in Oxnard California on 31 December 1943 and a graduate of Orem High School where she was the President of the Girls Athletic Association (GAA). Lily married Wayne Betts in 1962 and had four children Lynn (Patti), Tracy (Brett), Kelly (Jennifer) & Corey. Lily had a varied and exciting professional life; she was a head waitress, special needs caregiver, and a small business owner. It was in her business life that she met and later married Joseph Carter who together they shared a love of life, old trucks, camping, Sunday drives and movies. Lily is remembered for her baking prowess in chocolate cakes and pumpkin cookies and for always being the life of the party; she made sure everyone was made to feel welcome and was a consummate hostess. Lily had a love of music and figurines. To her friends, Lily was known as “mama bear” as she fiercely loved and protected her family and was especially fond of her grandchildren. Lily is survived by her brothers William (Bill) & Mickey, Bryan and James & Shauna Rohbock, her four children, their spouses, and twelve grandchildren. Lily was preceded in death by her parents William (Bill & Lillian), her husband Joseph Carter, and sister Ginger. Graveside services will be held at Provo Cemetery on November 6th at 10:00 am. A celebration of life luncheon will commence after the service at Golden Corral 171 W University Pkwy, Orem, UT 84058 Pallbearers: (Grandchildren) Jesse Betts, Brandon Earnshaw, Taylor Betts, Benjamin Betts, Hayden Betts, and Ryan Earnshaw, Honorary Pallbearers (Grandchildren): Gentry Betts, Ashley Betts, Wylie Earnshaw, Aspen Earnshaw, Bailey Betts, and Brooke Earnshaw

Lily (Rohbock) Carter, age 77 of Orem Utah, left this world on 2 November 2021. Lily was born in Oxnard California on 31 December 1943 and a graduate of Orem High School where she was the President of the Girls Athletic Association (GAA).... View Obituary & Service Information

The family of Lily Mae Carter created this Life Tributes page to make it easy to share your memories.