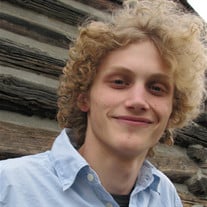 If a giant were to reach down into a forest and pluck a tree up out of the earth, they would leave an absence behind. Where the branches rose and the leaves spread, there would now be nothing, a gap between the trees. Where the roots ran deep, there would now be a pit, a crater with rocks sticking out from crumbling sides. Our forest is now one tree less, and there is a hole, an injury, a wound left behind. Lincoln David “LD” Wilks was born in Orem, Utah on February 5th, 2001, and died in Sandy, Utah in an automobile accident on the cold, clear, sunny morning of October 30th, 2019. Lincoln is survived by all his siblings, Ammon, Jacob, Levi and Ruby, and by his parents, David and Stefania Wilks. Lincoln was an organ donor, and we take some comfort in knowing his remains will help others beyond his life. Lincoln was a fully living human being, whose life touched other lives in more ways than we can know. The only person who could truly describe all of Lincoln died on that October morning. We can only describe that part of Lincoln that we knew. That part was kind. That part was gentle. That part looked toward the happiness of others. Our Lincoln was the youngest, and knew how to navigate a world where everyone had something to say, to tell, to ask. Lincoln knew how to be many things to many people. Perhaps because of this, Lincoln was quietly but fiercely independent. He would listen to what you said, and then do what he had decided to do anyways. He could be moody sometimes; he was human, he was a teenager. But there was a deep well of love in Lincoln, a willingness to step back, to think, to forgive. Lincoln forgave us many times, and we are lucky to have been forgiven. Lincoln’s independence was reflected in a unique sense of humor, a distinct sense of style and an eclectic and wide-ranging taste in music. We cannot hope to fully understand it, it was his alone, but we were always thrilled and amused to see what he would do or say or listen to next. He was a lover of games and good company of all kinds. We cannot look again on the things he wore, the memes he sent, the video game save files he kept, the records and cassettes he collected, and not remember him. Lincoln looked forward to personal milestones in his life, for the satisfaction they would bring him far beyond any extrinsic value placed on them by others. As a result, it was easy for him to arrange all the details involved in purchasing his car without any outside assistance, but it was a struggle to get him to graduate high-school. It was impossible to get him to write a paper, but he was a happy student of welding, well regarded for his ability by both his teachers and his peers. He had recently started work at UPS, looked forward to joining the Teamsters union and was excited to have a job he enjoyed with the potential to turn into a career. The fact that his starting salary was almost higher than any of his siblings didn’t hurt either. He was our golden boy, our ladies man, our pot-smoking rebel who could get in trouble for starting fires in the park one month and be an A-student in his criminal justice class shortly after. Lincoln was an explosion of light in our lives. The world is darker without him. We will have a memorial service for Lincoln on November 7th at the First Unitarian Church of Salt Lake, at 6:30 pm. We reach out to and beg any who knew Lincoln to feel free to come and to share their stories about him. We crave any memories of him. We thank the police for their quick response to the accident and their care in reaching out to us, and the Serenity funeral home for their assistance in putting Lincoln’s affairs in order. Please always buckle up.

If a giant were to reach down into a forest and pluck a tree up out of the earth, they would leave an absence behind. Where the branches rose and the leaves spread, there would now be nothing, a gap between the trees. Where the roots ran deep,... View Obituary & Service Information

The family of Lincoln David Wilks created this Life Tributes page to make it easy to share your memories.

If a giant were to reach down into a forest and pluck a tree...