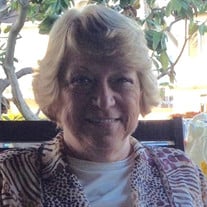 Linda R McCormick Obituary Linda Rachelle Daitz McCormick, 69, of Park City, Utah, passed away on September 22, 2016, from lung cancer. A native New Yorker, she has asked to be placed at Searing-Roslyn United Methodist Church Cemetery in Albertson, New York, with her mother and younger brother. Details about a Celebration of Life will be announced at a later time. Linda was born in the town of Mineola, on Long Island, on May 4, 1947. She graduated from Mineola High School and went on to study at C.W. Post College in Brookville, Long Island. She met and later married Robert N. McCormick on September 21, 1968; they were married for 34 years. Throughout her years, Linda lived life fully, and was known by those she touched, across all the aspects her life, for her faith, humor, generosity, and selflessness, among many other special gifts. She worked in the Human Resources industry for over 27 years, obtaining her GPHR Certification in 2004 and completing international assignments in Barbados, the Philippines, Australia, Mexico, and Canada as a Senior Director of Human Resources. Her colleagues described her as both a successful and respected businesswoman and as quite a character, always making people laugh with her dry humor and great delivery of a punch line. Family and friends remember Linda as both colorful and kind. She was the daughter of a Jewish immigrant father from Lithuania, a Protestant American mother with German roots, and married a Bronx-Irish-Catholic man. She taught Communion classes at St. Elizabeth Seton Catholic Church in Ridgefield, Connecticut, and filled her family’s life with faith, always encouraging them to find a way to a loving God and to follow the old adage “Do Unto Others As You Would Have Done to You.” She looked to the commandments as a beautiful way to live and get along in the world. Linda beheld anyone and everyone, whoever they were or wherever they came from. When she was younger, Linda was an avid and competitive tennis player at Shore and Country Club in Norwalk, CT, where the family spent their summers boating. She loved bowling and was well known for always being up for a game of canasta (or any cards!). She was actively involved in card playing and bowling groups in Fountain Valley, CA, and with the Newcomers Club in Park City, UT. She was also creative and spent time on crafts such as crocheting, knitting, dollhouse building, and needlepoint. Linda lived and spent most of her life in Ridgefield, CT, from 1970 – 2000, followed by moves to Virginia and Florida for her career. In 2012 she retired and moved to California to be with her daughter, son in law, and beloved grandchildren, allowing her to faithfully attend all of their sporting events and activities. She then relocated and lived with her daughter’s family in Park City for the last years of her life. Linda’s grandkids were her love and light and sharing so much special time with them brought her the greatest joy in her last years. Linda is survived by her son, Mark McCormick, her daughter Kristin Bryson and son-in-law, Todd Bryson, her grandchildren, Jackson, Colter, and Bridger Bryson, her brother Leon Daitz, her nieces Lauren and Elizabeth Daitz, and many other family members and friends. She is preceded in death by her mother, Louise S. Kamm, her father, Lewis R. Daitz, and her brother Lionel R. Daitz. In lieu of flowers, we ask you send memorial donations to The Pediatric Cancer Research Foundation Mikey’s Marauders http://cure.pcrf-kids.org/.goto/mikey Tax id # 95-3772528

The family of Linda Rachelle Daitz McCormick created this Life Tributes page to make it easy to share your memories.