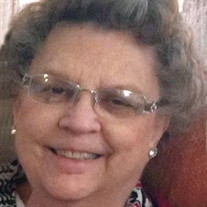 March 15, 1940 ~ March 17, 2016 Linda Joy Stephenson Davis, 76, passed away peacefully, surrounded by her family on Thursday, March 17, 2016. Linda Joy was born March 15, 1940, in Lava Hot Springs, Idaho to Ven Dean and Velma Joy Norstrom Stephenson. She moved with her family in 1944 to Kaysville, Utah, where she grew up. She graduated from Davis High School in 1958, then attended Utah State University in Logan. She met Ronald Paul Davis, a dashing young man, when she was working as a receptionist at Hill Air Force Base, and they were married on January 8, 1961. Ron and Linda raised four children together, and lived in Kaysville, Utah, St. Anthony, Idaho, Vernal, Utah, Roanoke, Virginia, Layton, Utah, and then on their farm in Reese (West Warren), Utah, where they lived from 1989 until Ron's death in 2011. Linda was an active member of the Church of Jesus Christ of Latter-day Saints and served in many capacities throughout her life, including chorister, teacher, and Relief Society President; she also served in stake callings. She lived her life joyfully serving others. Linda grew up taking dance lessons, and was an accomplished ballet, tap, and ballroom dancer. She loved music, and taught her children to love music. Linda's greatest joy and pleasure in her life was her family. She was a devoted wife, mother, and grandmother. She brought beauty, culture, and humor into her home. She modeled kindness, patience, graciousness, and always a joy de vivre. No matter the struggles life brought her way, she responded with optimism. She and Ron were great life partners and sweethearts, and were united in their love and devotion to their family. Linda Joy is survived by four children: Steven D. (Teri) Davis, Ogden; Tyson R. Davis, Ogden; Cynthia Smith, Kaysville; Denise (Brian) Mulvey, Layton; nine grandchildren; one great-grandchild; and brother, Paul (Peggy) Stephenson, Farmington. She was preceded in death by her parents, her husband, and her brother, Larry. Funeral services will be held at 11 a.m. at the West Warren LDS Ward at 856 North 5900 West, Ogden, on Wednesday, March 23, 2016. Friends may visit with family that morning at the same location, from 9:30 to 10:45 a.m. Interment at the Warren-West Warren Cemetery. The family wishes to express deep gratitude to the wonderful staff at Chancellor Gardens in Clearfield for their tender care of Linda for the last three years of her life.

The family of Linda Joy Stephensen Davis created this Life Tributes page to make it easy to share your memories.