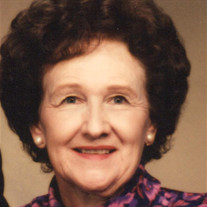 Emily Lois Andrew Bushman, age 91, died March 28, 2016, in Provo, Utah. She was born October 10, l924, in Jerome, Idaho, a daughter of John Henry and Emily Thomas Andrew. She was mostly known by her middle name, Lois. She married Morris Smith Bushman on June 11, l945 in the Salt Lake Temple. He preceded her in death December 8, 1991. After living in Malad, Idaho, Lois attended elementary and junior high school in Price, Provo, and Orem, Utah. She graduated from Tintic High School in Eureka, Utah where she served as Vice President of the Junior Class and Secretary of the student body her senior year. Finishing high school in December of her senior year, she worked five months in San Diego, California for Consolidated Aircraft as part of the World War II effort. Upon returning to Utah, she attended Brigham Young University for two years, majoring in secretarial training. After her marriage, she and Morris settled in Provo, Utah where they raised their six children. When her children were older she worked for a few years as a secretary in the Provo Mayor’s office. Most of her married years were spent working in her own home for the benefit of her family. She was active in the community and spent many years working in the PTA organization. Lois was a life-long, dedicated member of The Church of Jesus Christ of Latter-day Saints. She served as a teacher in Primary, Sunday School, Young Women, and Relief Society, as a Relief Society President and Counselor, Homemaking Leader, Genealogy Chairman, Den Mother, and has maintained nearly 100% visiting teacher her entire married life. She enjoyed doing family history work for over 40 years. She was also a great support to her husband as he fulfilled his many church leadership callings. She was a hard-working obedient person and a great cook. Most of all she was a loving and nurturing mother, grandmother and great grandmother. She was also a “mother” to many students in the BYU Asian Ward when Morris was Bishop. Lois and Morris enjoyed traveling and visited Hawaii several times, Peru, Japan, Taiwan, China, Hong Kong, Germany, Holland, Egypt, Israel and many places in the United States including several LDS Church sites. Lois had a great sense of humor, wit and fun-loving personality. She was dedicated and loyal to her family, and set a spiritual example for her children and grandchildren by living the precepts of the Gospel of Jesus Christ. Lois is survived and greatly loved by her six children: Patricia (Byron) Christensen, Cedar Hills, Utah; Karen (Richard) Bradford, Bountiful, Utah; Steven (Jolyn) Bushman, Alpine, Utah; Gary (Debra) Bushman, Alpine, Utah; Diane (Clinton) Bland, Bentonville, Arkansas; Craig (Krissie) Bushman, Cedar Hills, Utah; 34 grandchildren, and 55 great grandchildren. She was preceded in death by her husband, parents, and sisters, Betty Evelyn Forsey and Jennie Ruth Riggs. Funeral services will be held Friday, April 1, 2016, 11:00 a.m. at the LDS Church, 2900 North 650 East (Timpview Drive), Provo, Utah. A viewing will be held Thursday evening from 6:00 to 8:00 p.m. at the same location and also Friday from 9:30 to 10:30 a.m. prior to the funeral under the direction of Serenity Funeral Home, Draper, Utah. Burial will be at the Orem City Cemetery, Orem, Utah.

The family of Lois Andrew Bushman created this Life Tributes page to make it easy to share your memories.