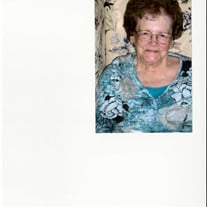 Lois Elnore Moncur Call, formerly of Twin Falls, Idaho, passed away peacefully on April 23, 2014 in West Jordan, UT at the age of 94, just one day short of her 95th birthday. Lois was born a few minutes before her twin brother, Louis, on April 24, 1919 in Rupert, Idaho to Donald Wesley Moncur, and Laura Amelia Larsen Moncur. She had four sisters and six brothers. She attended the Pershing school in Rupert where she and her twin brother were placed in class together. Lois loved to “mother” Louis, and eventually had to be moved to the opposite side of the room to prevent her from completing her work and his, too. She was raised in the middle of six brothers and learned the value of hard work. She often shared how she learned to outwork her brothers so their father would give the boys a hard time. Lois graduated from Rupert High School in May 1937 and then attended LDS Business College in Salt Lake. She married Ben Roberts Call in the Salt Lake LDS temple on November 29, 1938. She was an active member of The Church of Jesus Christ of Latter-day Saints, and served in the auxiliaries. Their first son, Larry Ben Call was born on September 23, 1939. After various jobs and communities in Idaho and Utah, they settled in Twin Falls, Idaho in 1947. Their second son, Randy Duane Call, was born on July 31, 1950. Lois exercised her great people skills by being a Twin Falls Welcome Wagon Representative. She knew most of the new people in Twin Falls at the time, and could not go anywhere that she did not have a friend, or would make a new one. Later, she worked at The Paris, for Mr. Faulkner, a job she really enjoyed. After retirement, Ben and Lois loved to get away during the winters to Yuma, Arizona. Often they traveled with a Family Motor Coach group, driving one of the many motorhomes they would purchase, fix up, and resale. They participated in monthly dinner club events, and always enjoyed family get-togethers with each other’s siblings. First and foremost, her priority was always her family. Lois was known for being a bit of a “mother bear” as she cared for her boys. There was never any doubt as to her loyalties. She was loved and adored by her family. Lois was overjoyed when grandchildren came along, and was there to joyously welcome each new addition. She played a supportive role in their lives. She loved to spoil them, and you could find her attending ball games, special events, and making sure birthdays and holidays were special, no matter how far away the grandchildren were. She did her best to stay involved with her great and great-great grandchildren, too, until her health prohibited her. Her sweetheart, Ben, passed away in 2007. Following his passing her health declined further, but she still had those instincts to befriend and serve as she made special friends at the Beehive Home Assisted Living Center. She is survived by her brother, Melvin, ( LaDonna ) of Twin Falls; son, Randy D. (Connie) Call , of West Jordan, UT; daughter in Law, Joan M. Call, of Orem, Utah, 13 grandchildren, 33 great-grandchildren and 9 great- great grandchildren. She was preceded in death by her parents, her husband, Ben; son, Larry B. Call, and all but one of her ten siblings.

Lois Elnore Moncur Call, formerly of Twin Falls, Idaho, passed away peacefully on April 23, 2014 in West Jordan, UT at the age of 94, just one day short of her 95th birthday. Lois was born a few minutes before her twin brother, Louis, on April... View Obituary & Service Information

The family of Lois Elnore Moncur Call created this Life Tributes page to make it easy to share your memories.