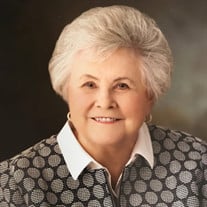 Lois Mae Garfield Beck Herrscher in her 86th year, passed away peacefully in the midst of her loving family on 25 February 2016 from causes incident to age. She was born in Magna, Utah, October 16, 1929 to Herman Lavell Garfield and Mabel Taylor. Parents and two brothers, Reed and Gaylen, preceded her in death. She is survived by a sister, Connie (Lamar) Hadley. Lois attended local schools graduating from Cyprus High School and was among the last survivors of the class of 1947. Later that year she married her sweetheart and devoted eternal companion, Sherman E. Beck in the Salt Lake Temple. Five children were born to them—Valene (George Cook), Paul (Debbie Russell), Shauna, (Fred Russell), Reed (Suzanne Rasmussen) and Janet (Taylor Randall). Lois and Sherman resided in Holladay beginning in 1949 where their children were raised among some of the best people on earth. The greatest legacy of her righteousness is to be most easily noticed in the worthy lives of her children, grandchildren and great grandchildren. In 1992, Lois and Sherman were honored to serve a mission to Bern, Switzerland when the Temple there was remodeled and re-dedicated. This mission was a highlight of their lives wherein they truly enjoyed their service in the House of the Lord while laboring among fellow missionaries with whom they formed life-long friendships. Lois owned and operated a catering company for many years providing renowned cuisine for many hundreds of local weddings and socials. She was gifted and talented as a master seamstress, gardener, baker and candy maker. As a skilled artist she produced some excellent oil paintings. She was innovative and adaptive to new things; a lifelong seeker of gospel knowledge; kept up to date on current world and local affairs; and maintained a meticulous record of her life. Lois and Sherman celebrated 50 years of marriage in 1997. Sherman passed away unexpectedly in 1999 at age 72. Lois then remarried a very fine man, Paul Herrscher, in 2002, whose companionship she enjoyed for some 12 years until his passing in 2014. Lois and Sherman were blessed with 29 grandchildren and 58 great grandchildren. Two grandsons, Jonathan Cook and Rex Stuart, previously passed into the spirit world and would have been among the first to greet her there. She faithfully served her church in many capacities including president of the stake Primary and Relief Society. Like unto the matriarchs of old, Lois was truly an elect lady called to live through an amazing era of change and progress. She has been as a shining beacon of light to guide many on this earth through difficult times and has constantly lifted the arms of the tired and weary. Her love and devotion to her family and unwavering faith and loyalty to the Lord are fitting monuments to her name as she completes her mortal life. She will be sorely missed but our joy is full in that which we know, “They that die in me...it shall be sweet unto them” and “...that same sociality which exists among us here will exist among us there...coupled with eternal glory.” Memorial services will be conducted 29 February at 12:00at the Holladay 18th Ward Chapel, 2625 Milo Way, Holladay. Viewing will be Sunday evening Feb 28 at the chapel from 6:00 to 8:00, then from 10:00 to 11:30, Feb 29, prior to the memorial services.

Lois Mae Garfield Beck Herrscher in her 86th year, passed away peacefully in the midst of her loving family on 25 February 2016 from causes incident to age. She was born in Magna, Utah, October 16, 1929 to Herman Lavell Garfield and Mabel Taylor.... View Obituary & Service Information

The family of Lois Mae Garfield Beck Herrscher created this Life Tributes page to make it easy to share your memories.