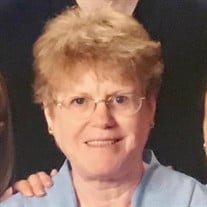 Loma Kay Hansen, beloved mother and grandmother, sister, and friend, passed away on Saturday, May 4th, 2019, at her home in South Jordan, Utah. She was born in Preston, Idaho to Harvey Stephen Hansen and Merle Radford Hansen on September 2, 1944. Kay was the oldest of seven children, with four sisters and two brothers. She spent her childhood in Preston, graduating from Preston High School in 1962. Growing up, Kay lived near lots of family, including aunts and uncles, grandparents and cousins. Get togethers were frequent and full of lots of laughter and lively conversation, and the occasional water fight. Those bonds formed with her family were very important to her and were something she cherished all her life. After high school, Kay moved to Salt Lake City and attended LDS Business College, earning an associates degree. She roomed with two of her lifelong childhood friends, Tammy and Carol, and worked at the Salt Lake Public Library. It was during this time that she met and married Victor Frank Veldevere. In the following years they had three children--Mark, Kim, and Kerri. During their marriage, Kay and Frank moved frequently for work, living in Vernal, Utah, Scottsdale, Arizona, and Boise, Idaho, to name a few. Wherever she lived, Kay formed lasting friendships both at work and church. Over the years she was employed at various doctors offices, doing medical billing, collections, scheduling, and other office duties. Without fail, she was considered an excellent employee, noted for her honesty, hard work, and pleasant nature. Kay also served in many different church callings throughout the years and was a devoted member of the Church of Jesus Christ of Latter Day Saints. She loved her Savior so much. Temple attendance and family history were two things she enjoyed participating in. Kay and Frank divorced in 1993, and she stayed in Boise for a couple more years before moving back to her beloved Salt Lake City. When the time came that her aging father could no longer live alone, she moved him close to her so she could lovingly care for him in his remaining years, visiting him nearly every day and tending to his needs with Christlike love until he passed away in 2014. Above all Kay adored her children and her 7 grandchildren. Her favorite times were spent with them, and they each have treasured memories of being with her watching movies, having sleepovers at her home, making cookies, playing board games, and so many others. Kay loved music and had a beautiful singing voice, which she used to participate in many church choirs over the years. She enjoyed going to see her favorite artists in concert and attending plays, especially musicals. Kay was also a huge Utah Jazz and St. Louis Cardinals fan and cheered enthusiastically for them whenever she could. Travel was definitely something she loved to do, particularly when she was able to go with her family and friends. Other hobbies were scrapbooking, embroidery, and crocheting. Kay’s legacy of love, friendship, and faith will never leave us and we will cherish each precious memory and honor her name forever. She is survived by her children, Mark (Brenda) Veldevere, Kim (Alex) Lowe, and Kerri Donnelly; grandchildren Braeden, Carter, Jordyn, Bryan, Madison, Jackson, and Aiden; and siblings Julie, Jim, Carol, Laura, and Ronald. Kay is preceded in death by her parents, Harvey and Merle Hansen, and by her sister, Kathy. Services will be held on Saturday, May 11th, 2019 at the LDS church building at 10885 Pampas Drive in Sandy Utah.The viewing will be from 9am-10:30am, with services following at 11am. Kay will then be laid to rest at South Jordan City Cemetery. The family wishes to give special thanks to the administration and staff at Legacy House of South Jordan and Aspire Hospice, for their attentive care of Kay these past three years, especially her hospice nurse, Jonathan.

Loma Kay Hansen, beloved mother and grandmother, sister, and friend, passed away on Saturday, May 4th, 2019, at her home in South Jordan, Utah. She was born in Preston, Idaho to Harvey Stephen Hansen and Merle Radford Hansen on September 2,... View Obituary & Service Information

The family of Loma Kay Hansen created this Life Tributes page to make it easy to share your memories.