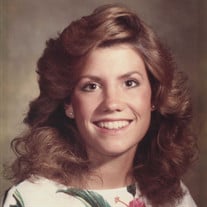 Lori Sue Gustin Wahlen Lori’s spirit left this earth on the morning of October 1, 2019. She will be missed immensely by all who had the privilege to know her. Lori was born December 8, 1967, in Salt Lake City, Utah. She grew up in Taylorsville, Utah, attended local schools there, and graduated from Taylorsville High School in 1986. She loved school and learning, and practiced those habits throughout her life. She was an excellent student and one of her favorite subjects was math. Lori was very active in sports and outdoor activities as a child. Among her many hobbies and past-times was playing hopscotch; jacks; riding the family horse; participating in track as a sprinter in middle school. She was a cheerleader in middle school, high school, and college; took ice skating lessons and participated in qualifying events that would have allowed her to compete for the Olympic team; participated in several dance groups; was a member of the National Honor Society; and learned to play the piano, a talent she continued to nurture throughout her life. She had a great love of Latter-day Saint hymns and for the music of Bach, Handel, and other composers of the Baroque period. Lori attended the University of Utah for nearly two years before getting married and moving to Paradise Valley, Arizona, where she remained for the next 5 ½ years. Although that marriage didn’t last, it was in Arizona where she got her start in data processing and soon afterwards as a computer software developer which resulted in a lifelong career in that field. She worked the last 17 ½ years of her life for the Department of Veterans Affairs. In that position her duties consisted mainly of developing and improving medical software programs used in the VA network of hospitals and clinics to maintain and improve the care of our nation’s veterans. Every day of work was devoted to helping others. Shortly after returning to Utah in 1994, Lori remarried (this marriage also ended in divorce) and had three daughters who were the love of her life. In the hierarchy of whom Lori loved most, her daughters clearly held the #1 position. She always took time for their phone calls and worked tirelessly to accommodate and facilitate their passions and extracurricular activities as they grew up. She even home-schooled some of them part-time so they could have a more flexible schedule to devote more time to their activities. One of Lori’s passions was traveling and at the top of her bucket list was a trip to France. She was able to realize that dream in June 2016 when she was accompanied by her daughter Ali on a trip to Paris where they were able to see the Eiffel Tower, Notre-Dame, the Arc de Triomphe, and other sights that she had read about and dreamed about someday seeing in person. She was a lifelong Francophile. Another passion was being a member of The Church of Jesus Christ of Latter-day Saints, especially during the last 7 years of her life. She was faithful and diligent in learning as much as she could and acting to develop and strengthen a strong relationship between her, Heavenly Father, and her Savior Jesus Christ. She was also an avid reader of the Book of Mormon, trying to read from the scriptures every day as her health permitted. Lori also developed a strong interest in family history and attending Latter-day Saint temples to do ordinances, especially for her deceased ancestors. Her last calling was to be an ordinance worker at the Jordan River temple. This fulfilled one of her goals in life. It is impossible to overstate the joy and comfort that Lori derived from being an active Latter-day Saint. It was a feeling she wanted all to experience. Lori was diagnosed with cancer in the spring of 2009. She fought valiantly for over 10 years in an attempt to prolong her time in this life, enduring countless series of radiation and chemotherapy treatments and constant pain throughout her body for those 10 years as the cancer eventually spread to her bones and organs. She won many battles but ultimately lost the war as her mortal body was finally overcome. Some of the things Lori loved were her kids, dark chocolate (especially the imported varieties), France (and anything to do with France), travel, Ben & Jerry’s Phish Food ice cream, helping others in a variety of ways, Halloween, warm weather, her granddaughters (she always wanted to be a grandmother), the designs of old doors, cooking, and Harry Potter. Everyone who knew her made a place in their heart for her. Lori is survived by her mother Patsy Gustin, her sister Joey (Shawn Kennedy), her three daughters Maysen, Tylar, and Alexia, and her two granddaughters Sephira and Nova, plus numerous nieces and nephews. A viewing will be held Monday, October 7, 6-8pm and again Tuesday, October 8, 10-11am in the LDS church building at 12154 S. 3600 W, Riverton, UT. The funeral service will follow at 11am. The graveside service will be at Valley View Memorial Park, 4335 W 4100 S at 1:30pm.

Lori Sue Gustin Wahlen Lori&#8217;s spirit left this earth on the morning of October 1, 2019. She will be missed immensely by all who had the privilege to know her. Lori was born December 8, 1967, in Salt Lake City, Utah. She grew up in... View Obituary & Service Information

The family of Lori Sue Gustin Wahlen created this Life Tributes page to make it easy to share your memories.

Lori’s spirit left this earth on the...