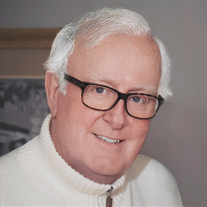 Lucas Reinier Visser (79) passed away in his home on February 24th, 2020. He was born April 1st, 1940 in Amsterdam Netherlands to Gerard Nieland and Reina Canten. In 1963, after serving in the Royal Netherlands Airforce, Lucas was baptized by Lyle Hillyard and became a member of The Church of Jesus Christ of Latter-day Saints. In September 1964, his dream to immigrate to the United States came true when his Visa was finalized. With $15 in his pocket, 2 suitcases, a one-way flight to New York and a train ride across America, he began his journey to create his own American dream. Upon arriving in Utah, he lived with Maria & Bert Van Komen who loved him like a son. He met the love of his life Sharon Eva White and was married in the Salt Lake Temple on June 7th, 1965. Lucas was an incredible illustrator, graphic designer, sculpter, author, craftsman and overall comedian. He had a passion for art history, music, Dutch treats and English cranberry cheese. Lucas graduated Cum Laude from the University of Utah in Fine Arts. He put all his energy into starting a new business named Total Design Communications which created logos, brochures and other marketing materials for numerous businesses in the local community. One of his most recognizable designs was the Channel 5 logo. He also designed logos for Snelgroves Ice Cream, Hogi Yogi, Gecko's, Crystal Inn and the Jordan School district. He had the great honor of being awarded the Clio Award in 1980 for innovation and creative excellence in advertising, design and communication. Lucas most recently served a mission at the FamilySearch Family History Center. He cherished the missionaries with whom he served and the experiences they shared. He also served in the Jordan River and Draper Temples. His greatest treasures were his wife, family, the gospel of Jesus Christ and his home - which he personally hand crafted to create a castle for all to enjoy. It has been confirmed that he left behind several unfinished items on his honey do list. Those items include, but are not limited to ... re-tiling his shower with decorative tiles from Mexico, installing a new ceiling in his workshop and finishing his 2019 tax returns. He is survived by his wife Sharon Visser. Children & Grandchildren: Angela's beloved children [Brayden, Maegan] Michael Visser Teresa Webster [Kennedi, Kyra, Kimora] Patrick (Stacie) Visser [Emma, Kaylee, Amelia, Graham] Daughter in law: Trazee Boyd [Zoey, Jade, Max] Tim Maddox "Brother from another mother" Coco (yorki-poo) He was preceded in death by his daughter Angela Cooley and son Ryan Visser. A special thank you to the Sandy City Emergency Response team.

Lucas Reinier Visser (79) passed away in his home on February 24th, 2020. He was born April 1st, 1940 in Amsterdam Netherlands to Gerard Nieland and Reina Canten. In 1963, after serving in the Royal Netherlands Airforce, Lucas was baptized... View Obituary & Service Information

The family of Lucas Reinier Visser created this Life Tributes page to make it easy to share your memories.

Lucas Reinier Visser (79) passed away in his home on February...