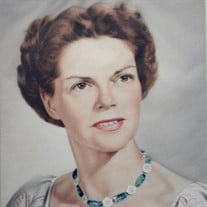 Lucille C. Blake, born Feb 22, 1916, died Dec 2, 2016 Lucille Blake passed away on Friday, December 2nd at Elk Meadows Assisted Living in Oakley, Utah at the grand old age of 100 years and 9 months. Lucille, having been born in 1916, lived a full life and witnessed many changes over those 100 years. She was born and went to school in Worchester, Massachusetts -- and spent the rest of her life attempting to rid herself of that east coast accent! She was a precocious individual, taking flying lessons when she was 18 or 19 (in 1935--what kind of airplanes were there then?) and enjoyed flying whenever the opportunity presented itself. She spent 21 years traveling the world as the wife of an US Air Force enlisted man until they retired to the White Mountains of Arizona. She was an avid outdoorswoman, enjoying camping, fishing and rock hunting in the mountains and deserts of the southwest. She last went fishing 2 years ago and caught yet one more trout!. She was a talented artist, painting landscapes and still lifes in a number of different mediums, but her favorite were oils. She produced over 100 paintings and won a number of blue ribbons and "Best in Show" ribbons at various art shows through the years. During their retirement years, she and her husband of 43 years, John Blake, traveled the country in their motor home (affectionately nicknamed "The Beast") exploring new places. They were snowbirds, wintering in various beach front areas for years, then later around the Yuma, AZ area where they loved camping at Mitry Lake on the Colorado River. They were also avid square dancers, acquiring many friends through that activity and planning many of their trips around dance festivals. She is survived by son Jason Blake of Park City, Utah and daughter Judith Brinkman of Kansas City, Missouri, 7 grandchildren, and a number of great grandchildren and greatgreat grandchildren. She was preceded in death by her husband, John, son Steven Blake and daughter Mary Grant.

The family of Lucille C Blake created this Life Tributes page to make it easy to share your memories.