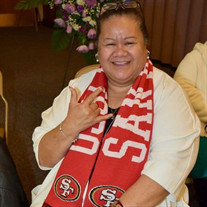 Lucy Afemata Tanuvasa, 57, passed away peacefully on November 9th, 2018, in West Jordan, UT. She was born on September 11th, 1961, in Laie, Hawaii to Pemasa and Onolina (Seumanu-Vili) Afemata. On September 11th 1982, she married her high school sweetheart Pita Paul Tanuvasa (Collins) and later was sealed for time and eternity in the Los Angeles California Temple on December 3rd 1983. In her childhood, she attended several schools in Hawaii and California. In 1979, Lucy was a proud graduate of Kahuku High and Intermediate School. Shortly after, she reunited with her sweetheart in Compton, CA. Lucy was a loving and caring mother, who believed in tough love. She dedicated her life to raising her 6 children. In the summer of 1993, they relocated back to Hawaii so that they could provide the same upbringing that she and her sweetheart cherished. Being the natural mother that she was, she loved and cared for her nieces, nephews and even friends. Her home was always opened to those that needed a place to stay. Her hobbies included sewing, cooking, shopping, learning new crafts, family time, and most importantly spoiling her grand kids. Lucy was survived by her 6 children Nephi (Sangeeta), Tanya, Pita Jr (Beverley-Hazel), Misiona (Joseph Prasad), Oriana, and Teuila; her grandchildren Sophie, Joseph Jr., Jazmin, Amulek, Pita III, Raina, and Talia-Rose; her siblings Misiona Fao, Masela Afemata, Taliloa Afemata, Vahine Loa, Senovefa Tuigamala, and Souvenir Green. Preceded in death, by her eternal companion Pita Tanuvasa Sr., her parents Pemasa and Onolina Afemata, her siblings Fauao, Faupo, Masela, Michael, Frank, and her 6 grandbabies. Before laying her to rest in the islands, her funeral service in Utah will be held at The Church of Jesus Christ of Latter Days Saints (Heritage Samoan Ward) 7336 S 3200 W West Jordan Utah, 84084 on Sunday November 18th 2018 at 6:00 pm. Afterwards she will return home to Laie, HI for her final services at the Laie Hawaii North Stake Center on Dec 1st. Following her services she will be laid to rest next to her Sweetheart at the Laie Cemetery. Fa'afetai tele lava and thank you for the outpouring love and support we have received at this time. Special thank you to Lucy's home wards, Heritage Samoan ward (Utah) and Laie 6th ward (Hawaii) for their love and hospitality. Mahalo nui loa to our Red Raider Community for being a huge influence in her life. Last but not least, thank you to the Afemata and Tanuvasa extended families. Please share memories and condolences at www.serenityfhs.com.

Lucy Afemata Tanuvasa, 57, passed away peacefully on November 9th, 2018, in West Jordan, UT. She was born on September 11th, 1961, in Laie, Hawaii to Pemasa and Onolina (Seumanu-Vili) Afemata. On September 11th 1982, she married her high school... View Obituary & Service Information

The family of Lucy Afemata Tanuvasa created this Life Tributes page to make it easy to share your memories.