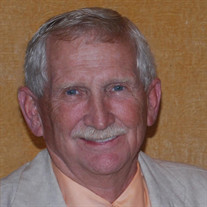 Dr. M. Kay Brown 1943 – 2015 Dr. M. Kay Brown passed away April 14, 2015 peacefully with his loving wife Patricia by his side. Kay was born April 20, 1943 to Laurel Jasper Brown (Brownie) and Amanda Johnson Brown in Tuscon Arizona. Kay married Patricia Bennion Brown on June 3, 1965; their marriage was solemnized in the Salt Lake City Temple. As a young man Kay worked on a ranch breaking horses, rodeoing and being a Cowboy. He always dreamed of raising horses and loved being around them. Kay was an Eagle Scout and Arrow of Light recipient. Kay served in the Central American Mission for the Church of Jesus Christ of Latter Day Saints from 1962 -1965. Kay held many church positions including serving as a Bishop and as a member of the Stake Presidency. His favorite Church calling was teaching the Gospel Doctrine class. Kay graduated High School from the Juarez Academy in Colonia Juarez, Mexico, received a B.S. from BYU in 1970 and graduated from Loyola University School of Dentistry in 1974. Kay practiced Dentistry and Orthodontia for many years in Idaho and Utah. His greatest joy in life was his family. He and Pat provided a loving and caring home for their four children, their spouses and eleven grand-children. Kay is survived by his wife Pat; his children: Michael (Leota) Brown, Andrea (Bryan) Paul, Kati (Mark) Hawes, Matt (Maryann) Brown, his grandchildren: Levi Hawes, Mason Paul, Evan Kay Hawes, Kayla Paul, Alexis Hawes, Kyler Brown, Camryn Paul, Gavin Hawes, Max Brown, Carter Brown and Emily Kay Brown. Those who knew Kay are better for having known him and we are all poorer for his departure. In lieu of flowers, the family requests that a donation be made to Shriner’s Hospitals for Children. https://www.shrinershospitalsforchildren.org/donate Funeral Services will be held 11:00 a.m. Friday April, 17, 2015 at the LDS Chapel located at 14550 Juniper Crest Road, Herriman, Utah. Viewing services will be held Thursday, April 16th from 6:00 to 8:00 PM at the same LDS Chapel and Friday 10:00 – 10:45 a.m.

The family of Dr M. Kay Brown created this Life Tributes page to make it easy to share your memories.