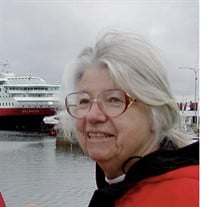 On February 19, 2021, Marelynn Weiss Zipser passed away peacefully at the age of 83. Marelynn was born on May 27, 1937 in Jersey City, N.J. to Georgianna Miles Weiss, a registered nurse, and Theodore Weiss, a teacher in the North Bergen, N.J. public schools. She grew up in North Bergen with her younger sister Carol and graduated from Weehawken High School. She obtained a Bachelor's degree from Douglass College, part of Rutgers University. While at Douglass, Marelynn met Edward Zipser who was attending nearby Princeton University. After Ed and Marelynn married in 1958, they both attended graduate school at Florida State University. In their seven years in Tallahassee, Marelynn earned M.S. and Ph.D. degrees in food science and nutrition, published two academic papers, and gave birth to two children, Geraldine Miles (Gerry) Zipser, now of Newton MA, and Jacqueline Claire (Jacqui) Zipser, now of Fort Collins, CO. Ed and Marelynn moved to Boulder, Colorado in 1966, where their two daughters grew up through high school. While Ed was a professional meteorologist at the National Center for Atmospheric Research in Boulder, Marelynn's career in food science began with part-time teaching at Colorado State University in Fort Collins, then to writing children’s textbooks on nutrition for the State of Colorado in Denver, then to quality control for a pickle and salad dressing company in Denver. Finally, she spent twelve years as Director of Product Development and Quality Control for Celestial Seasonings Tea Co. in Boulder. She formulated many new tea blends for the company, including Mandarin Orange Spice, Lemon Zinger, and Cinnamon Rose. She was active in state and local politics and served for several years as a Colorado State Fair commissioner. Marelynn and Ed enjoyed the outdoors in Colorado and introduced their daughters to the joys (and occasional hardships) of hiking and camping in the mountains all over the West. Marelynn relished finding antiques at garage sales and taught herself how to refinish and reupholster furniture, and even how to cane chairs. She was also skilled at knitting, needlepoint, and embroidery. She was more than a wonderful wife and mother; she was a role model for her two daughters which no doubt contributed to their becoming professional women – both are attorneys – while also raising children of their own. Marelynn was so happy to know her four grandchildren (Gerry’s daughters Ruth and Margaret and Jacqui’s sons Julian and Adrian) and to watch them grow into wonderful young adults. Marelynn gave up her own professional life when Ed’s meteorology career took them to Texas A&M University in College Station in 1990 and then to the University of Utah in Salt Lake City in 1999. In both places she was a tremendous support to Ed. Once settled in Salt Lake City, Marelynn volunteered for the Assistance League, the League of Women Voters, and the University of Utah Women's Club. But she especially appreciated the genealogy resources of the Family History Library. After tracing her own family tree back to the 17th Century, she turned her attention to Ed’s ancestors, who came from the part of the Austro-Hungarian Empire that is now Slovakia, and became adept at translating records from Hungarian into English. She volunteered for the International Association of Jewish Genealogical Societies and in 2016 received the Volunteer of the Year award for transcribing over 150,000 records (!) for their Hungarian group . For a long time, Marelynn and Ed enjoyed the cultural advantages of Salt Lake City, attending Utah Symphony, Utah Opera, and Ballet West, as well as offerings at the University of Utah. Marelynn was also up for travel and adventure; in addition to accompanying Ed on his professional travels to meetings in North and South America, Europe, Asia, and Africa, she joined in adventure cruises on Russian icebreakers in both the Arctic and Antarctic, visiting all seven continents before she turned 70. It was with great sadness that Marelynn's family and friends learned of her diagnosis of Alzheimer's disease in 2017, and in 2019 it became necessary for her to enter the Memory Care Unit of Capitol Hill Senior Living. Ed, Gerry, and Jacqui want to express their heartfelt thanks to all the caregivers at Capitol Hill who assisted Marelynn through the last difficult twenty months of her life. She is already very much missed, but the happy memories of her wonderful life and of her many, many contributions will live on. Marelynn was preceded in death by her parents and sister, Carol. She is survived by her husband Ed, daughters Gerry and Jacqui, sons-in-law Jim Allard and Holger Kley, four grandchildren, and brother-in-law Don. In light of COVID-19 restrictions, no services are planned. In lieu of flowers, it would be consistent with Marelynn's volunteer work to donate to either the League of Women Voters of Utah https://www.lwvutah.org/ or to the Assistance League of Salt Lake City https://www.alslc.org/.

On February 19, 2021, Marelynn Weiss Zipser passed away peacefully at the age of 83. Marelynn was born on May 27, 1937 in Jersey City, N.J. to Georgianna Miles Weiss, a registered nurse, and Theodore Weiss, a teacher in the North Bergen, N.J.... View Obituary & Service Information

The family of Marelynn Weiss Zipser created this Life Tributes page to make it easy to share your memories.