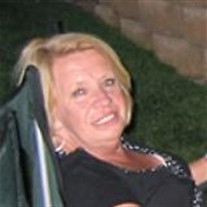 Our sweet Mom, Grandma, Daughter, Sister, Aunt and Friend passed away on March 22, 2017 due to injuries caused by an automobile accident. Margaret JoAnn Fivas, also known as JoAnn, was born in Salt Lake City, Utah on December 8, 1950 to Fred Johnson and Margaret Gladys Morris. She had two sisters (Colleen Johnson & Shauna Archuleta) and a brother (Fred Johnson). JoAnn married her sweetheart Rex A. Fivas and they have three children together: Kristal (Max) Anderson, Rex (Deana) Fivas, and Kerrie (Chad) Johnson. She is the stepmom to Kim (John) Robertson and Joe (Julie) Fivas. Rex & JoAnn’s grandchildren are Tyson & Tanner Fivas, Christopher & Natalie Johnson, Alex Rickard, Randi, Andrew & Jack Robertson, and Ellie & Gabbi Fivas. JoAnn had a zest for life. She was fun and brought joy to those around her. JoAnn had many talents – one of those talents is she could “name that tune” in one note. A song would come over the radio and she’d have the title and artist figured out within seconds. She loved music and enjoyed showing off her dance moves from time to time. JoAnn worked for Community Nursing Service in the medical records department for almost 33 years. She was a great example to her family as a dedicated and hard worker. Spending time with her family made her the happiest. Shopping, going on trips together, heading “west” to play the “Buffalos”, and having sleepovers with her grandkids are just a few of the things JoAnn loved. She also enjoyed the special friendships she made throughout her life. JoAnn is survived by her children and step-children, grandchildren, mother, brother, as well as two nieces: Trudie SchreinerWood & Rachael Johnson. Her husband, sisters, and nephew, Justin Johnson, are waiting to greet her on the other side. We invite JoAnn’s family and friends to honor the life of this amazing woman on Wednesday, March 29 at a graveside service being held at the Murray City Cemetery at 2:30 pm. The address is 5490 S. Vine Street in Murray, UT 84107.

Our sweet Mom, Grandma, Daughter, Sister, Aunt and Friend passed away on March 22, 2017 due to injuries caused by an automobile accident. Margaret JoAnn Fivas, also known as JoAnn, was born in Salt Lake City, Utah on December 8, 1950 to Fred... View Obituary & Service Information

The family of Margaret Fivas created this Life Tributes page to make it easy to share your memories.