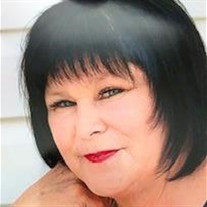 Margaret Wiberg Thompson, 64, passed away peacefully with her Loving Husband next to her on December 2, 2018 after a short battle with cancer. She was born on March 25, 1954 in Topeka Kansas to Ray Napoleon Rocco and Margaret “Peggy” Arnold. She was married in 1973 to Ronald Clarence Wiberg in Plain city Utah. They would have 3 boys Ross, Justin, and Jarred then later divorce. She Met Robert “Kevin” Thompson and they were married in 1996 in Ogden City and later established residence in Syracuse Utah. Margaret moved with her family at the young age of 11 from Mobile Alabama to Riverdale Utah in 1965 and her parents later settled in Sunset Utah where she would attend middle school through graduation at Clearfield Highschool in 1973. Margaret loved all her siblings dearly, but especially her youngest sister. At an early age she would become the primary care taker of her younger sister Raena through adulthood until she would pass at an early age. She cared for Her Nephew Shelton Allen (Raena’s son) as her own and would speak often of how much he reminded her of her little sister whom she missed so much. Margaret was active in auxiliaries including the Roy Elks lodge and the Eagles Lodge of Ogden where she initiated and kept several longtime friendships over the years. She worked in several manufacturing companies in multiple capacities including accounting and payroll. She retired from Utility Trailer in the spring of 2018. Margaret always worked to keep in touch wither her siblings as they spread out across the states. Throughout the years she would be a source of assistance and care for friends and family alike. She was always quick to opinion and very stubborn so, she would never admit how she cared and worried after people, but she was a nurturer by heart and constant worrier. Her passion was in her children and grandkids and always wanted them around. Oliver(Jarred) and Skyler(Cheyenne) were the most recent additions and were able to spend many hours with her. She volunteered to become a foster care provider and had the opportunity to host several children at different durations over the last 10 years. She would later adopt Cheyenne La Drew in August 2011 whom she adored and loved as her own. She was very excited to welcome little Skyler (daughter to Cheyenne) in 2017 and loved spending time with both. In the last few months of her life she spoke of her longing to be reunited with her siblings and parents that had preceded her in death. Brothers, Jim, Ray, Tom, and Joe as well as her beloved sister Raena and parents Ray and Margaret. She is survived by her husband Kevin Thompson, sons, Ross, Justin, Jarred, Shelton, daughter Cheyenne, nephew Rocco Allen, and 7 Grandchildren and 1 great grandchild. A viewing service for close friends and family will be held on Thursday December 6th , 2018 6-8 PM at the church house located at 1469 W. 700 S. Syracuse, UT 84075 with the funeral service taking place at the same location on Friday December 7th at 11:00 AM. The Graveside service will be held shortly after the funeral at the Syracuse City Cemetery.

Margaret Wiberg Thompson, 64, passed away peacefully with her Loving Husband next to her on December 2, 2018 after a short battle with cancer. She was born on March 25, 1954 in Topeka Kansas to Ray Napoleon Rocco and Margaret &#8220;Peggy&#8221;... View Obituary & Service Information

The family of Margaret Wiberg Thompson created this Life Tributes page to make it easy to share your memories.

Margaret Wiberg Thompson, 64, passed away peacefully with her...