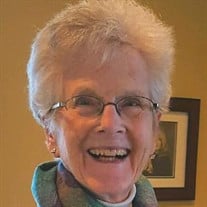 Margaret Jane Walter Wise (Peg) Our sweet Mom drew her last breath on August 8, 2018 in Salt Lake City, Utah. She was 83 years old. All those who knew and loved her will feel the void left by her passing and will miss her bright smile. Peg, the daughter of Navy Captain Dr. Austin Jacob Walter, and Minnie Jane Ross, was born in Shanghai, China May 23, 1935. She was the sister of Dr. Linda Elizabeth Johnston (Savannah, GA), and brothers (deceased) Robert and David Walter. As military families do, the Walters lived all over the country including Newport, RI; Norfolk, VA; Wheeling, WV; Pensacola, FL; Fullerton, CA; Mom’s favorite place - Whidbey Island, WA; and Corpus Christi, TX. They settled in Sautee Nacoochee, GA where she finished High School. In Atlanta, Mom met her Ramblin’ Wreck from Georgia Tech, Harry Dearman Wise, who she married August 27, 1957. She graduated with a nursing degree from Emory University in 1958. Harry and Peg moved to Minneapolis, MN in 1958, where she taught at Macalester College until her daughter Laura was born. In 1964 the family moved to Bad Hamburg, Germany for a year, then back to the Twin Cities. In 1971 they moved to Salt Lake City, Utah. Mom made life-long friends wherever she lived and treasured them all. Her Minnesota friends were especially dear. In Salt Lake City, Mom continued to foster a large community of friends, entertain, support Harry and the girls in their varied interests, and she began working outside the home again. She worked at St. Marks Hospital until returning to the University of Utah and obtaining her graduate degree as a Pediatric Nurse Practitioner in 1981. When Harry and Peg moved back to the Twin Cities in 1983, she worked for the Minnesota State Board of Health until retiring in 1999. In 2013 Peg made one last move to Salt Lake City to be near family. Mom had many interests. She was, above all, a voracious reader and could always be found with a book in her hand. Poetry was a favorite and she was able to recite poems she learned in High School and College. She loved gardening, cooking, entertaining, and music – specifically classical. Mom never turned down an offer for ice cream or a frozen mocha and she appreciated good food. Her religious life was very important to her, especially the 1st Congregational Church community in Minneapolis. She was a lifelong, fervent Democrat. Most of all, Mom loved people. She had a huge heart and was kind and compassionate. Many younger people considered her a “Second Mom” “Earth Mama”, or “Aunt Peg”, and she embraced everyone she knew. Peg is survived by her daughters Laura Althoff (Judson), Seattle WA, and Linda Beaufort (Dave), Salt Lake City, Utah. Granddaughters Kate Cobbett (Andrew Wentworth), Corvallis, OR and Sarah Cobbett, Seattle, WA. Grandson Alex Beaufort, Salt Lake City, Utah. Fur-Grandchild Finnegan. Sister Dr. Linda Johnston, Savannah GA. Son-in-law Tyler Cobbett, Palo Alto, CA. She leaves a brother-in-law and sisters-in law, nieces and nephews, dear friends, all of those other “kids”, and a trail of broken hearts. The family would like to give special thanks to the Brookdale Sr. Living Family and Rocky Mountain Hospice, all of whom do the work of angels. A Life Celebration will be held at a later date. Please feel free to share memories and condolences at www.serenityfhs.com. In lieu of flowers the family suggests a donation to Hospice https://hospicefoundation.org/, Reach Out and Read : http://www.reachoutandread.org/ways-to-give-to-reach-out-and-read/ , Emory University, or a charity of your choice.

Margaret Jane Walter Wise (Peg) Our sweet Mom drew her last breath on August 8, 2018 in Salt Lake City, Utah. She was 83 years old. All those who knew and loved her will feel the void left by her passing and will miss her bright smile. Peg,... View Obituary & Service Information

The family of Margaret Jane Walter Wise created this Life Tributes page to make it easy to share your memories.

Our sweet Mom drew her last...