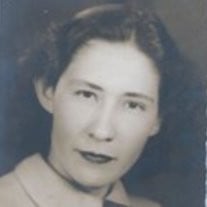 Maria Bizerra de Callata Passed away on August 29, 2013 at the University Of Utah Hospital in Salt Lake City, Utah. She was born on February 8, 1921 in Iquitos, Peru. Born to Raymundo Bizerra and Carmen Venegas. She married Helio Callata Casani on October 14, 1974 in Breña district of Lima, Peru. She was sealed in the Washington Temple on December 12, 1981. She grew up in the jungles of the Amazon where she lived many interesting experiences and learned to eat and cook very exotic meals typical of the forests. She moved to the city as a teenager, there she learned to sew, embroider, knit and became very successful in this field. She even used to be a teacher in a high fashion academy. She loved her profession and was always Weaving or embroidering. One day in March of 1965, she had had a dream in which Jesus gave her a book, days after missionaries gave her the Book of Mormon, and without hesitation she accepted baptism without hearing any talks. She moved to Venezuela with her family, stayed there about 20 years. She was a very helpful person, and had a lot of friends at home, all by her daughter. She liked to make different foods and desserts to please people, and they loved her because they were delicious. She taught herself to play the piano and later taught primary children. She loved music; she knew all the hymns of the church and was very picky about the melodies. After she moved to Salt Lake City where she lived 15 years, she met many beautiful people to whom she wanted so much and despite the language difference that existed with them, she never stopped talking and talking. It is not necessary to understand the language of the people to know their feelings. She had eleven siblings, her surviving family is Helio Callata (husband), Mariela Callata de Brito (Daughter), Ivan Rubio (Son, New York), Jose Daniel Rubio (Son, New Jersey), Alejandro Rubio (son, deceased), Ronix Brito (son in law), James Alejandro Brito (grandson), Angela Brito (granddaughter). The Funeral Services will be on Saturday morning September 7, 2013 in Cannon 7th ward chapel at 934 West, Fremont Ave, Salt Lake City and will follow to West Jordan Cemetery.

Maria Bizerra de Callata Passed away on August 29, 2013 at the University Of Utah Hospital in Salt Lake City, Utah. She was born on February 8, 1921 in Iquitos, Peru. Born to Raymundo Bizerra and Carmen Venegas. She married Helio Callata Casani... View Obituary & Service Information

The family of Maria Bizerra de Callata created this Life Tributes page to make it easy to share your memories.