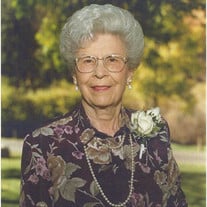 Marie Lange Pugmire’s Life Sketch By Laraine Pugmire Anderson, daughter Life does not begin with an individual’s birth. An infant who arrives unblemished into the world must learn to adapt to what history and circumstances have created for his or her parents. Cassie Marie, the tiny, squalling infant girl born to the young couple, William and Jessie Lange, was beset with sorrow and challenge from the sultry first day of July 1918, until she reached adulthood. Marie’s mom Jessie was the oldest of 11 children born to John William Washington Hawkins and Mary Magdalene (Maggie) Carroll. Jessie married William Henry Lange at age 15, encouraged by Maggie, because she was already pregnant with her son William. She birthed a child each of the first four years in a loveless union at home with the help of a midwife and her mother. When Marie was born, Maggie had just delivered her own eighth child CG, one month before. Marie’s parents divorced in 1926, splitting the children in half, with the oldest two boys, William and Tillman, to live with the Lange relatives and help out on their farm, and Marie and Lee to live with Jessie. They were happy when their mom married a nice man, W B (Dub) Harbeson in June 1, 1926. He was seven years younger than Jessie, but he treated all of them very lovingly. Jessie was sickly the last year of her life and died May 1, 1929. The Depression came on a few months later, and life was challenging for all. Marie went to live with the Hawkins grandparents, but they were unable to care for everyone, she Marie and Lee were sent to live with their dad and his new wife Grace, who was only 19 years old and had just given birth to their first son. She did not want the burden of caring for Marie and Lee. Lee was sent to live with Lange relatives to help on the farm. Marie’s father at the time sold eggs and produce from his truck garden and tried to find an alternate living circumstance for his daughter. He stopped at one of his customers who he knew took in homeless children. Mrs. Oberg wasn’t going to add to her brood until Marie pleaded. She helped the lady with housework and errands. While shopping at the grocery store, Marie ran into her Aunt Johnny V who lived on the same street a few blocks away. She and her husband Calvin Swygert were unable to have children and invited her to come live with them. Calvin had a good job making machine parts with Hughes Tool Company. Johnny V was a poor housekeeper, so Marie helped out. The family introduced her to her best friend Anna Mae Crochet. This was when Marie was thirteen and was becoming attractive to boys. Calvin was very protective and followed her around unobtrusively. They traveled often to their cabin close to Galveston, where they went motorboating, crabbing, and swimming. Marie told Anna Mae her dream was to grow up and own a yacht. (But she thought the pronunciation rhymed with hatchet!) Obituary & Service Information Marie Lange Pugmire, widow of Wayne Rich Pugmire, passed away at her home in Murray on Thursday, October 19, 2017. Born July 1, 1918 the third of four children and only daughter of William Henry Lange and Jessie Lena Hawkins in East Bernard, Wharton, Texas, she was raised in impoverished conditions. Her parents divorced while she was young and her mother died when she was ten. She rose above her condition when she became active in the LDS Church and served a mission in the Northwestern States. She met the man she would marry who was stationed in Bellingham, Washington during World War II. Wayne and Marie married July 6, 1944 in the Logan LDS Temple and were together 26 years until his untimely death on November 30, 1970. She was a devoted stay-at-home mom seeing to her children’s nurture and serving faithfully in all the ward auxiliaries, including twice as Relief Society president. She also served several years as a worker at the Jordan River Temple. She is survived by four children: Laraine (Dave) Anderson, Loralee (Bryan) Thatcher, Kimball (Brenda) Pugmire, and Wes Pugmire; 13 grandchildren; 28 great grandchildren; and a 100 year-old brother Tillman J. Lange. The family thanks the staff of the Elevation Home Health and Hospice, especially Beverly, Tanisha, and Patti. Also many thanks to Syndee with Visiting Angels. Funeral Services will be held at11:00 a.m., Monday, October 30, 2017 at the Belview Ward in Murray located at 6300 South 300 East. A viewing will be at this location one hour prior. Interment will be at the St. Charles, Bear Lake Cemetery.

Marie Lange Pugmire&#8217;s Life Sketch By Laraine Pugmire Anderson, daughter Life does not begin with an individual&#8217;s birth. An infant who arrives unblemished into the world must learn to adapt to what history and circumstances have... View Obituary & Service Information

The family of Marie Lange Pugmire created this Life Tributes page to make it easy to share your memories.