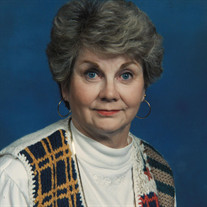 Marilyn W. “Buff” McPhie, age 76, beloved mother, grandmother, great-grandmother, sister, aunt and friend, passed away February 15, 2017 due to complications of pneumonia after a long and courageous battle with rheumatoid arthritis. She was born on March 8, 1940 to May Strong and Arthur Joseph Wilson in Salt Lake City, UT. Marilyn was the second of three children. At age 13 she fell off a bridge and has lived a life full of pain with courage and dignity. She graduated from Olympus High School and attended BYU. She loved her family and was affectionately known as “Grandma Tea Party”, “Nan” and “GG”. Her home was known as a gathering place for the neighbors and had been given the nickname “community central”. She was a friend to all. She worked as a dental assistant, PBX operator, ER Admitting and Senior Health Companion. She had a quick wit and said exactly what she was thinking. Marilyn is survived by her children: daughter Renae McGinn and son Jim McPhie (Bonnie), brother: Charles “Buck” Wilson (Sheila), five grandchildren: Tim McGinn, Sara McGinn, Danielle Bentley (Blair), Jaimee Robinson (Marcus) and Morgan McPhie and four great-grandchildren. She was preceded in death by her parents and brother (Don). Married Jerald McPhie in 1960 and later divorced. A public viewing will be held on Thursday, February 23, 2017 from 6 PM to 8 PM at Valley View 4th Ward, 2125 Evergreen Avenue, Salt Lake City, UT. A graveside service will be held on Friday February 24, 2017 at Alpine City Cemetery, 400 Grove Drive, Alpine, UT, where she will be laid to rest. The family would like to thank the ER and PCU staff at St. Marks Hospital for their kindness and compassion given to Marilyn in her final days.

The family of Marilyn W. "Buff" McPhie created this Life Tributes page to make it easy to share your memories.