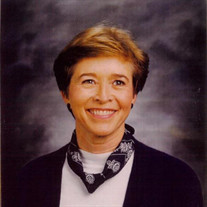 On Tuesday, 2 March 2021, our dearly loved mother, grandmother, and great-grandmother, Marilyn Brighton Wardle, age 85, departed this life in West Jordan, Utah. She died from non-alcoholic liver cirrhosis. Marilyn will be remembered for her: generosity and kindness; love of family; artwork; ability to beautify her surroundings; compassionate service; love of gardening; and especially as a servant of Jesus Christ. She was a ready helper and a trusted and loyal friend. Marilyn was born in Bennett, Utah, on 21 September 1935, to Sidney Alvarus Brighton and Evelyn Fanny Whitelock, and was the last of 7 children born to them. She graduated from Union High School and was married to Don L. Killian on 13 August 1953. They had four children together: Sidney Grant (Shaunna), Patti (Roger Clark Johnson), Clay L. (Maridee), and Guy T. (Gerusa). While we were young, a divorce ensued making it necessary for Marilyn to find full-time employment. She was encouraged to run for Duchesne County Treasurer, and shortly after learning that she had won, our family moved across the street from the county court house where she worked. We played on the lawn outside her office, and occasionally she would open the window to check on us. Later, she met and married Larry K. Wardle, on 20 July 1967. Soon thereafter they moved the family from the Uintah Basin into Salt Lake City, Utah. It was while living in Taylorsville that mother first decided to read and pray about the Book of Mormon and learned of her Heavenly Father’s love and mercy and of His Eternal Plan for His children. This brought her much peace. She served faithfully in many church callings, some of these included: Primary worker, Compassionate Service Leader, Gospel Doctrine Teacher, and Relief Society President. All of these callings brought growth and unique service opportunities. Mother belonged to a book club and enjoyed reading and discussing ideas and authors. She belonged to The Daughters of the Utah Pioneers and hosted and participated in their meetings as well. But her enduring interest and outstanding talent was as an artist and homemaker. As her children married, she bought a kiln and molds and made each of them many ceramic holiday decorations. She was frequently called upon to make backdrops and scenery for road shows, and twice she worked on designing floats for the 24th of July Parade. One year a float she designed received the History Award and was featured on the front page of The Church News. Scrapbooking and craft days were a common occurrence in our family room. She always had a beautifully landscaped yard, winning two city awards for the most beautiful yard. She also enjoyed preserving fruits and canned grape juice, tomatoes and tomato juice, apricots, peaches, pickles, and green beans. After she sold her kiln, she focused on her most enjoyable and soul-satisfying talent of all: oil painting. Nearly all of her children, and many of her grandchildren have been tutored at her easel and many family members have at least one painting of hers adorning their homes. Many of her paintings can be viewed on You Tube: “The Art Work of Marilyn Brighton Wardle,” which is made available by her son, Sidney Grant Killian. Mother has always been a nurturer of small children who graced her home, both family and neighbors. She enjoyed teaching them reading and math skills and was dearly beloved by many. Rarely did we ever sit down to a Sunday family dinner when we did not first deliver a plate of food to a widow or widower or perhaps to a family friend. Marilyn was preceded in death by spouse, Larry K. Wardle (2014); parents, Sidney Alvarus Brighton (1973), and Evelyn Fanny Whitelock (1957); siblings: Ruth Saari (2005), Sidney Brighton (1920), Laurence Brighton (2009), Eula Watkins (2001), Glen Brighton (2003), and Kent Brighton (2015). A Viewing will be held at 10:00 a.m. on the morning of Monday, 8 March 2021, at the Taylorsville 12th Ward Chapel, located at 4505 Brians Way, West Valley City, Utah, followed by a Funeral also at this same address at 11:00 a.m. Due to Covid-19 restrictions on gatherings, the funeral will also be streamed on-line. In order to gain access to the video stream, please go to http://t12.erygg.com/ on Monday, 8 March 2021, at 11:00 a.m. The Burial will follow the funeral at the Utah Veterans Cemetery and Memorial Park located at 17111 South 1700 West, in Bluffdale, Utah at 1:30 p.m.. We invite you to share your memories of Marilyn at www.serenityfhs.com The family would also like to offer a special thank you to ALL of the staff at Bristol Hospice who cared for Marilyn, specifically: Debbie, Tiffany, Laura, April R., Tynesia, Stephanie, Natalie, Jackie, Mary Liz, doctors Richard Allen and Kevin Johnson, but especially to her regular aide, April A., who did so with exceptional tenderness.

The family of Marilyn Brighton Wardle created this Life Tributes page to make it easy to share your memories.