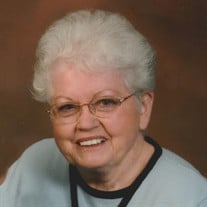 Marge Stoker, 85, reunited with her beloved husband on May 13, 2017 surrounded by her loving family after suffering a stroke. We celebrate that she is now pain free from a lifetime of suffering, without ever feeling sorry for herself or complaining. This great lady will be remembered for her incredible example of strength, determination, and endurance. Marge the youngest of four children was born February 24, 1932 to Byron Haslam and Elma Nevada Skillicorn in Salt Lake City, Utah where she lived most of her life. Marge married her eternal companion Don Lundquist Stoker January 16, 1953 in the Salt Lake City Temple. They celebrated 63 years together before his death just 6 months ago in November 2016. They got engaged right before Don left for his mission and Marge joined a group of friends that were waiting for their missionaries and servicemen that called themselves the Standbys, and 66 years later the couples still meet together monthly. Friends were her specialty. She was socially involved with many friend dinner groups and book clubs. Family and friends were the lucky recipients of her many cards, handmade gifts, and home cooked wonderful meals over the years. She is famous for her yummy caramels and cinnamon rolls that she made. Marge’s greatest trait was her steadfast devotion and service to her family, her church, and her friends. She was always happiest when surrounded by her family, spending time with them, and always encouraged them in their pursuits. She felt her greatest accomplishment was her family and she cherished each one. Marge is survived by her children: Cherie (Scott) Willey, Julie (Greg) Thompson, Richard (Nicki) Stoker, son-in-law Brad Campbell, 11 grandchildren, and 16 great-grandchildren with one on the way. She is preceded in death by her parents, brother, sisters, and daughter Karen Campbell. The family expresses heartfelt thanks and appreciation to those that offered compassionate services especially to the Stone Ridge Ward, her Legacy House Family, Aspire Hospice, and IHC Aides-Victoria, Jin, and Tamalyn. Funeral services will be held at 12:00 p.m. Saturday, May 20, 2017 at the Stone Ridge Ward building located at 12070 S. Laurel Chase Dr. (1515 W.) Riverton, Utah. A viewing will be held prior to the service from 9:30-11:30 a.m. Interment: Salt Lake City Cemetery. www.serenityfhs.com

Marge Stoker, 85, reunited with her beloved husband on May 13, 2017 surrounded by her loving family after suffering a stroke. We celebrate that she is now pain free from a lifetime of suffering, without ever feeling sorry for herself or complaining.... View Obituary & Service Information

The family of Marjorie Hetty Haslam Stoker created this Life Tributes page to make it easy to share your memories.