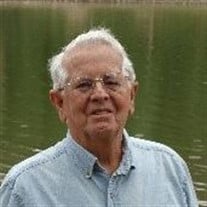 Marlon Herbert Kent, named after his grandpas, triumphantly left his cancer-riddled body behind at 4:44 p.m. on Monday, December 12, 2016, and joyously went home. He was born October 26, 1939, in Boise, Idaho, to Victor Loveland Kent and Emily May Aldridge Kent. He was raised on a dairy farm in Star, Idaho, where he learned to get up when he was called and to do the job right the first time. He graduated from Meridian High School (Go Warriors!) in 1957. He served an LDS mission to the British Isles – England, Scotland, Ireland – from 1959-1961. He was drafted into the US Army and served his time both in the Army proper and in the Army National Guard where he received an honorable discharge. He married Carolyn Jean Waltman November 3, 1963, in the Idaho Falls Temple; she later died. He married Sherilyn Jepson in Nephi, Utah, on October 5, 1974. They were sealed for time and all eternity in the Salt Lake Temple on January 8, 1977, and had their children sealed to them. Marlon spent most of his life working on dairy farms with a couple of years on a sheep ranch. In 1989 the LDS Church closed the farm where he was employed so, at age 50, he went back to earn his nursing degree. He was successful, but his strongest advice was that everybody should go to school in their youth rather than waiting till age 50! He spent the rest of his working career at the Utah State Developmental Center. He dearly loved the people who lived there and went out of his way to make sure their lives were as easy and pleasant as possible. Marlon was always active in the LDS Church, accepting and magnifying every calling he ever received. He always admitted, though, that he had his favorite callings. He dearly loved being a home teacher, serving faithfully in that calling from the time he turned 14 until his death. He also greatly enjoyed being a temple worker, serving in the Mt. Timpanogos Temple Baptistry. His very favorite callings, of course, were those of being a son, brother, husband, Daddy, Grandpa and Great-grandpa. Marlon was proceeded in death by his parents, his first wife, his sister Arlene and family, his brother Burton and son Brian, his brother Dean, his son Davey, and 2 brothers-in-law, Wilden Moffett and Wes Jepson. He is survived by his cherished wife Sherilyn. His sons: Tim; Richie; Alan (Kristin); Ben (Jamie); and Marty (Heather). Daughters: Becky; Kimi (Brian) Wilkinson; Sandy (Joel) Jensen; Emily (John) Green; Tammy (Butch) Harris; Trudy (Brian) Bullock; Rosemary (Kevin) Mills; Suzi (John) Oakley; Angie (Josh) Kenyon. He is also survived by 20 grandsons, 20 granddaughters with 2 on the way, 2 great-granddaughters; one brother; Warren (Leah) Kent; sisters: Marjorie Moffett, Joyann (Neal) Collett; Joyce (Ron) Fulkerson; sisters- and brother-in-law: Bonnie Kent, Marilyn Kent, Wayne (Kathie) Jepson, Jeannie Jepson. The viewing will be held Friday, December 16, from 6:00-8:00 p.m. at the Lehi Second Ward building located at 481 E. 300 N. in Lehi; a second viewing starting at 10:00 and the funeral, at 11:00, will be held at the same building on Saturday, December 17. Burial will be at the Vine Bluff Cemetery at 1200 North 400 East in Nephi, Utah. The family would like to express their deep appreciation to Summit Hospice Care and especially Leandra, Carlos, Annette and Wes who gave above and beyond the call of duty in their care for Marlon. They made his transition a beautiful and peaceful occasion.

Marlon Herbert Kent, named after his grandpas, triumphantly left his cancer-riddled body behind at 4:44 p.m. on Monday, December 12, 2016, and joyously went home. He was born October 26, 1939, in Boise, Idaho, to Victor Loveland Kent and Emily... View Obituary & Service Information

The family of Marlon Herbert Kent created this Life Tributes page to make it easy to share your memories.