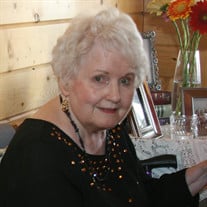 Beloved mother, sister, grandmother, great-grandmother and friend, Marsha Davis Woodworth passed away July 29, 2019 at her home in Orem, Utah, of causes incident to age. She leaves behind many loved ones and will be deeply missed. Marsha was proud of her family heritage. She was born to William Lawrence Davis and Evelyn Virginia Tilson, on December 12, 1937, in Provo, Utah. Her father descended from British and Danish Latter-day Saint pioneers who had crossed the plains to the Great Basin. Her mother was a second-generation Latter-day Saint whose father had joined the church in his native Virginia and married a Utah pioneer. When Marsha was two years old, her father passed away in an auto accident, leaving Evelyn a widow with two children, Marsha and older sister Carol. Evelyn moved back home to Payson, found work as a shorthand secretary, and left her daughters under the care of her mother, Chloe. Marsha and Chloe formed a special bond, and Marsha later credited her grandmother with being the pivotal influence in her early life. When Marsha was twelve, Evelyn moved her family to Salt Lake. Soon after, she married Paul Monsen, a widower from Mount Pleasant. The course of Marsha’s life changed forever when, at age seventeen, she stepped onto a Union Pacific eastbound train. On the train she sat next to a young man named Charles Woodworth, a university student who had been called on an LDS mission to Tonga and was heading home to say goodbye to his family in Joplin, Missouri. They became pen-pals, and after he returned from his mission, they married in the Salt Lake Temple, on December 19, 1958. Marsha’s marriage to Chuck oriented her life towards the South Pacific. After she completed a bachelor’s degree in education from Brigham Young University and he a master’s in social work from the University of Utah, they taught at Liahona High School in Tonga. They later lived in Miami, Florida; Provo and Salt Lake City; and Tempe, Arizona. Between 1972 and 1974, they led the Tonga Nuka’alofa Mission. She loved the islands and made many lifelong friends there. Marsha and Chuck took their three children—Brad, Becky, and Jed—with them on their mission. But she and Chuck felt their family was incomplete. After returning to Utah, they adopted a newborn named Rachel. She was sealed to the family in the Salt Lake Temple in 1977. They made their home in Bountiful, and Chuck made a career of marriage counseling for LDS Social Services. Marsha was a people person, sociable, bubbly, and playful. She never forgot a name and a story. She was also a reader and a writer. She loved physical exercise: walking, running, Pilates and water aerobics. She cherished the church and served in it willingly. She had an abiding faith in God and in his goodness. Marsha delighted in the domestic life. No one loved canning fruit and baking bread more than she, and she eagerly threw her energies into advancing the lives of her children. Still, she yearned to stretch her talents outward. In 1984, Marsha returned to the workforce, hired by Farmington Elementary to teach special education. She found great satisfaction in helping kids with learning disabilities. She taught at the school full-time for sixteen years. In 2000, Marsha retired from school teaching and moved with Chuck to Utah County, first to a condominium in Orem and then, in 2006, to a home they built next door to their daughter, Becky, in Lindon. They made many happy memories there. After Chuck died in 2011, Marsha moved to Treeo Independent Living in Orem and later to Covington Senior Living in Orem. She made countless friends in these places and will be missed by all. Marsha is survived by her sister, Carol (Leland), Las Vegas, Nevada; children Brad, Woodbridge, Conn.; Becky (Reed), Lindon, Utah; Jed (Shawna), Lehi, Utah; Rachel (Brad), Bountiful, Utah; seventeen grandchildren (plus one on the way), and two great-grandchildren. The family wishes to thank the many CNAs and nurses who assisted Marsha at Treeo and Covington. Friends and family may visit on Saturday, August 3, from 10:00 to 10:50 a.m., at the Lindon 4th Ward meetinghouse, 731 East Center St., Lindon. Funeral service to follow at 11 a.m. Interment will be at Lindon City Cemetery following the service.

Beloved mother, sister, grandmother, great-grandmother and friend, Marsha Davis Woodworth passed away July 29, 2019 at her home in Orem, Utah, of causes incident to age. She leaves behind many loved ones and will be deeply missed. Marsha... View Obituary & Service Information

The family of Marsha Davis Woodworth created this Life Tributes page to make it easy to share your memories.