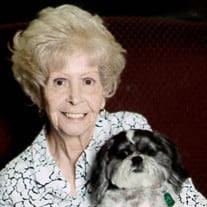 Martha Arlene Morley passed away on October 3rd, 2014 in Draper, Utah She was born October 5th 1934 in Moroni, Utah to Allen Perry Morley and Doris Stewart. She was the eldest child. She had a younger brother, Larry that she adored. At age 8 her father suffered a horrible death that greatly affected the family. Two years later her mother moved the three of them to Manti, Utah She met Max Hansen and the two married and were blessed with a baby daughter, Sharron. The five of them lived in Manti, Arlene loved Max so much. The grandchildren spent many summers there with Grandma and Grandpa Max. Arlene had a love of writing. She wrote many, many poems and had a book published. She worked for Valley Bank for 16 years and had many long lasting friends there. She liked to camp and travel when she could. She lived in Salt Lake City after she married for the remainder of her life. She was an active member of the LDS Church. She had many friends and family who loved her dearly. She is survived by her first husband, Gaylen R. Olsen. They married on June 20, 1952, and later divorced. They had 5 children together. Randall G. Olsen (Debbie), Janet Henry, Cheryl (Jeff Terry) and Tracy Olsen. Also survived by her brother Larry (Berdine) Morley, and her sister Sharron (Edwin) Stilson. She had 15 grandchildren and 22 great grandchildren. Many nieces, nephews, cousins, and friends. She is preceded in death by her parents, step-father Max Hansen, daughter Suzanne Lovato, and daughter in law Lori Ross Olsen, along with many nieces, nephews, aunts, cousins and friends. There will be a memorial service for her on Saturday, October 18th, at 12 noon at the West Jordan Cemetery located at 7800 South 1300 West, West Jordan Utah. Family and friends can say their goodbyes at that time. She chose to be cremated but will still have an interment. Please share memories and condolences at www.serenityfhs.com Thank you to all who loved and cared for her.

Martha Arlene Morley passed away on October 3rd, 2014 in Draper, Utah She was born October 5th 1934 in Moroni, Utah to Allen Perry Morley and Doris Stewart. She was the eldest child. She had a younger brother, Larry that she adored. At age... View Obituary & Service Information

The family of Martha Arlene Morley created this Life Tributes page to make it easy to share your memories.

Martha Arlene Morley passed away on October 3rd, 2014 in Draper,...