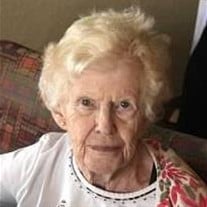 Mary Emma Sowter Gould, aged 91, passed away at home on March 5th, 2016 in Salt Lake City, Utah, surrounded by her family. She was born March 21st, 1924 in Hackensack, New Jersey, to John E. and Clara W. Sowter. She married Thomas Richard Gould on May 23rd, 1953 in Ridgewood, New Jersey. She is survived by Tom, her husband of 62 years; children Barbara Miller of Atascadero, California, Priscilla Roberts (Ken) of Tucson, Arizona, John Gould (Leslie) of Midland, Texas, MarySue Howisey (Chuck) of Salt Lake City, and Tom Gould (Shari) of Colorado Springs, Colorado; 13 grandchildren, and 8 great-grandchildren. Mary grew up in Ridgewood, New Jersey, and graduated from Ridgewood High School in 1941. She attended Guilford College in North Carolina, and graduated from Columbia Presbyterian School of Nursing in New York City with a bachelor of science in nursing degree in 1946. She worked as a labor and delivery nurse at Columbia Presbyterian Medical Center until her marriage to Tom in 1953 when she devoted herself to care of her growing family. Mary and Tom lived in Martinsville, New Jersey, until 1972 when they moved their family to Littleton, Colorado. Except for a one year stint in Sao Paulo, Brazil, they remained in Littleton until 1995, when they retired to Tucson, Arizona. They moved to Salt Lake City in 2012. Mary’s compassion manifested itself in many ways. She returned to work as a nurse in 1975, and continued working until retiring in the late 1980s. After moving to Tucson, she and Tom volunteered with Mobile Meals, taking meals to senior citizens. Mary also looked after her “old ladies,” most of whom were younger than her. She would also take cookies to the newspaper salesmen working at traffic intersections around Tucson. These acts of compassion came as naturally to her as breathing. In retirement, Mary worked for several summers in Yellowstone National Park, a place she loved to visit, and with deep family history. Mary’s family was her pride and joy. She loved and cherished her children, their spouses, her grandchildren and great-grandchildren. She was beloved matriarch to a clan of 34. The family would like to thank the staff of CareSource Hospice, particularly Jody Davis and Dr. Carole Baraldi. A celebration of life will be held at Church of the Resurrection, 1131 S. Main Street, Centerville, Utah, 84014 on Saturday, March 12th, at 2pm. In lieu of flowers, donations in Mary’s memory may be made to Church of the Resurrection or to CareSource Charitable Foundation, 1624 East 4500 South, Salt Lake City, Utah, 84117.

The family of Mary Emma Sowter Gould created this Life Tributes page to make it easy to share your memories.