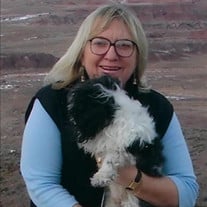 Mary Jane (Baxter) Farrer “Calamity Jane”, age 75, of Jackson, Wyoming, died Sunday, August 11, 2019, at The Auberge at Aspen Park in Salt Lake City, Utah. Jane was born June 24, 1944, in Allen Park, Michigan. She was the daughter of the late Hubert Baxter and the late Loretta (Geise, Baxter) Hofmann. She grew up in Allen Park and was a 1963 graduate of All Saints High School in Detroit. Jane went on to get her Registered Nursing degree from St. Joseph’s Nursing School in Ann Arbor. She later went on to complete a master’s degree from University of Detroit Mercy. Jane had been employed by Oakwood Hospital and Mercywood Hospital as a Registered Nurse in the psychiatric units. She became a city health nurse for the City of Detroit working in the Cass Corridor. Jane met William B. Farrer and they married on May 27, 1967, at St. Francis Cabrini Church in Allen Park. They honeymooned and “tented” all throughout Europe. Jane and Bill lived in Trenton in a beautiful home where they always welcomed family and friends to relax, enjoy, and spend quality time with each other. Jane worked for years in Trenton as a city nurse and then as a school nurse. Jane and Bill ventured out west for retirement to Jackson Hole, WY in 1997. Jane adored her gardens, traveling, playing baseball, watching college basketball (especially March Madness), knitting, crochet, and playing cards with family. Some of her best times were with her dogs (first Baxter, then Wild Bill) at her “home on the range.” She made holidays (especially Halloween) and birthdays very special. She worked at the Jackson Hole and Greater Yellowstone Visitor Center and mapped out and navigated exciting destinations in the Grand Teton and Yellowstone National Parks and other local destinations for many visiting tourists. Jane is preceded in death by her father, Hubert Baxter; her mother, Loretta (Geise, Baxter) Hofmann; her husband, William B. Farrer; her brother-in-law, Leon “Lee” Monroe; and her sister-in-law, Rosella “Rose” Baxter. She is survived by her brothers Ralph (Barbara) Baxter, and James Baxter; her sister Carol Monroe; her son Kirk (Kathi) Weissenfluh; her beloved grandchildren, Davis, Brooklynn, Jackson, and Carter; and many cousins, nieces, nephews, other relatives, dear friends, and her very special doggy, Wild Bill. The funeral will be held 10:00 AM, Friday, August 23, 2019, at the Church of the Transfiguration, 25225 Code Road, Southfield, MI 48033.

The family of Mary Jane Farrer created this Life Tributes page to make it easy to share your memories.