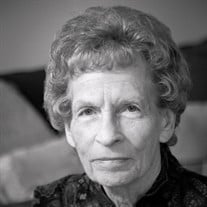 Our beloved, gentle, saintly mother, Mary Elva Johnson Wilkerson, passed peacefully from this mortal life on October 31st, 2014 at home with her loved ones by her side. Mary was born on February 28, 1922, in a boxcar in Soldier Summit, Utah, daughter of Mary Alice Thompson and Leland Stanford Johnson. During her early years she lived with various relatives in Utah; then in 1933 she moved with her mother and sister to Las Vegas, Nevada, where she attended high school and met her sweetheart, Byron Lewis Wilkerson. They were married on April 20, 1939 in Las Vegas. They were the parents of seven children: Linda, Shana, Bill, Sally, and triplets Patricia, Peggy, and Leonard. When Byron joined the Navy Seabees in 1943, Mary cared for her three children during his overseas wartime service. Mary was taught by lady missionaries and was baptized a member of the Church of Jesus Christ of Latter-day Saints in July 1953. She cherished her simple but strong testimony of the gospel and remained faithful throughout her long life. She was a lifelong learner and was so proud of earning her high school diploma with honors at the age of 44 at Las Vegas High School. Mary and By moved from Las Vegas in 1980 and built their retirement home in Midas, a beautiful mining town in northern Nevada, where they lived for 22 years. Because of Byron’s health, they moved to Orem in 2002. Mary’s pride and joy was her family. She delighted in having them near, visiting, walking together, and playing games. Mary was passionate about sharing trivia, her favorite card game “spite and malice,” and walking every morning in the mall. She loved meeting people and had a hug and a kind word for everyone. She was preceded in death by her husband Byron; triplets Patricia, Peggy, Leonard; sister Jean Morris; brothers Kelsey Johnson and Stanford Johnson; and great-grandsons Taylor Michael Arnold and Gage Alan Davis. Mary is survived by children Linda Barney, Washington, Utah; Shana Betts (Wayne), Spanish Fork; Bill Wilkerson (Janice), Moroni, Utah; Sally Felt (Steve), Orem; 29 grandchildren, 80 great-grandchildren, and 19 great-great grandchildren. Funeral services will be held at 11:00 on Wednesday, November 5th, at the LDS Chapel, 150 East 600 North, Orem, Utah. Friends and family may call at 9:30 prior to services at the church. Interment will be in the Orem City Cemetery.

Our beloved, gentle, saintly mother, Mary Elva Johnson Wilkerson, passed peacefully from this mortal life on October 31st, 2014 at home with her loved ones by her side. Mary was born on February 28, 1922, in a boxcar in Soldier Summit, Utah,... View Obituary & Service Information

The family of Mary Elva Johnson Wilkerson created this Life Tributes page to make it easy to share your memories.