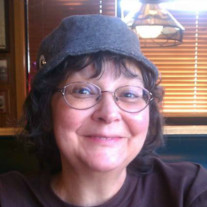 MaryDe Anne Jorgensen had her final curtain call September 4, 2013, in American Fork, at the age of 62. She was born August 18, 1951 to George Edgar and Mary DeMarco Jorgensen, in Orem, Utah. MaryDe graduated in 1969 from Orem High School and went on to earn a bachelors degree in Executive Secretary in 1990 at UVSC (now UVU). On October 1, 1980, MaryDe was married in the Salt Lake City LDS Temple, and later divorced. She then remarried to Dennis Kay Clayton (deceased) in the Utah County Roman Catholic Church on March 3, 1999. Throughout her life, MaryDe explored many employment options working at such places as Signetics, doing circuit board manufacturing, until 1992; Shopko, as a Pharmacy Technician, until 2012; and last, but certainly not least a Pirate, which is an indefinite calling of hers. MaryDe accomplished many goals and achievements in her life including: became a gold medalist on the Orem Tigers Swim Team in the summer of '67; Received an award as ShopKo Stores LLC 25 year lifelong achievement award "Outstanding Veteran Employee; she received the CB Radio Club KF6PSL "Heads Up" accolade; and it's even been reported that she was a Nobel Peace Prize winner for the "Greatest Mother of the Millennium." There were many hobbies and passions that kept MaryDe busy. She was known as an avid movie goer (Cinephile), a projectionist, a naturalist, poet, loved to travel (pedal to the metal Dee Dee), capitalized on many opportunities of charity (homeless shelters, adopt a highway, food banks); and had a special knack for and found joy in bringing a smile to everyone. MaryDe is survived by her son Remington Clayton; step-children Corey Clayton and Tammy Chatwin; as well as her brother, George Eddie Jorgensen. Memorial Service information is pending, but additional information can be found at: https://www.facebook.com/groups/535612529809186/. The family would like to extend a special thanks to the ShopKo Pharmacy Team, Corey Clayton, Colleen Witt, Kevin Asher, Tanner Light, Jake Sorensen....and you!

MaryDe Anne Jorgensen had her final curtain call September 4, 2013, in American Fork, at the age of 62. She was born August 18, 1951 to George Edgar and Mary DeMarco Jorgensen, in Orem, Utah. MaryDe graduated in 1969 from Orem High School... View Obituary & Service Information

The family of MaryDe Anne Jorgensen created this Life Tributes page to make it easy to share your memories.