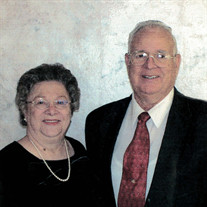 Maureen Law, 78, died on March 1, 2018 in West Jordan, Utah. She was born on November 12, 1939 to Clate and Marva Mask in El Paso, Texas. She was the second of four children. She grew up in El Paso, graduating from high school in 1957. She went to cosmetology school, and then entered the career that she loved- banking. She met her eternal sweetheart, companion, and husband, Lamont Law while he was stationed at Ft. Bliss, Texas. They were married in the Manti Temple on September 5, 1959, for time and all eternity. This eternal bond would carry her through Lamont serving a tour of duty in Vietnam, and being apart the last year of their lives. She faithfully stood by his side while he served his country for 25 years. During this time, she and her family lived in Utah, New Mexico, Texas, Alabama, Germany, Wisconsin, Maryland, and Alaska. After retiring from the Army, they lived in Tooele, Utah for ten years. Lamont again retired and moved back to his hometown of Orangeville, Utah. She continued working for First Security Bank, and later Wells Fargo, retiring from banking in 1999. Maureen was a member of the Church of Jesus Christ of Latter-day Saints. She labored in many callings, including serving three full-time missions with her husband: Spain Barcelona, Texas McAllen (both Spanish speaking) and a home mission. She and Lamont also served in the Manti Temple for two years. She was valiant in her testimony of Jesus Christ, and her love for her husband and children. She was preceded in death by Lamont by only four months. She leaves behind three daughters: Susan (Richard) Netzley of Hyrum, Julie (David) Curtis of West Jordan, and Amy Price of Riverdale. She has 17 grandchildren and 15 great-grandchildren, with one more on the way. Two of his daughters served a full-time mission, and eight of his grandchildren served, including two currently serving now. One is in Kansas and the other in California. She is survived by two brothers, Rudy Mask of California, and Clate (Carol) Mask of Arizona, and a sister Linda (Vaughn) Hassell of Arizona. She is also survived by her brother-in-law Sherald (Emma Lou) Law of Price, Utah, and a sister-in-law Joyce Law of Orangeville, Utah. She was preceded in death by her parents, parents-in-law, brother-in-law Ruane Law, sister-in-law Ruby Mae Snow, and sister-in-law Carolyn Mask. There will be a viewing on Thursday, March 15 at 6567 S. Wakefield Way, West Jordan, Utah from 6-9 pm. Funeral proceedings will be held on March 17, at 45 W. 100 S., Orangeville. A viewing will be from 9:30-10:30 am, with the funeral at 11:00 am. Interment will be at the Orangeville City Cemetery.

The family of Maureen Law created this Life Tributes page to make it easy to share your memories.