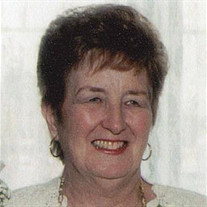 Maureen Egli Nelson (85) was born on March 2, 1932 in Salt Lake City, Utah to Theodore Lambert Egli and Garnet Irene Llewellyn. She passed on January 9, 2018 at her home in Millcreek, Utah into the compassionate, loving arms of her savior and we know there was a joyful reunion with her stepson, parents, sister and her little grandma who was her guiding force in life. Maureen and Keith Raymond Nelson were married and sealed in the Church of Jesus Christ of Latter-day Saints Salt Lake City Temple on January 10, 1951. Later divorced, she worked at the Capri Restaurant and in retail sales while taking community night classes in accounting. She worked for many years doing accounts payable/receivable with several companies including the Keith O'Brien stores and MSI (Mining Services Inc.). From her childhood in downtown Salt Lake City, she was an avid book reader in addition to never missing an article or an obituary in the Salt Lake Tribune every day for 60 years. We are grateful she passed her passion and knowledge onto each of us. In retirement, she spent time with her family and stayed close to her longtime friends, however her obsession was always her yard and garden. She worked outside daily, until her strokes began at age 83, and she never stopped longing to be in her yard. She is survived by her daughters Debra Maureen Nelson Myers (Scott) of Sandy, Utah, and Pamela Rae Nelson Davenport of Holladay, Utah; and her sons David Keith Nelson of Millcreek, Utah, and James Theodore Nelson (Marianne) of West Jordan, Utah. She is also survived by her brother Steven Theodore Egli of Redondo Beach, California, two granddaughters, three grandsons, three great-grandsons, three great-granddaughters, one nephew, one niece, two grandnephews and many cousins. She was preceded in death by her father, mother, sister Patricia Ann Egli and stepson Larry Dean Nelson all of Salt Lake City. As a member of the Millcreek Ninth Ward, a viewing/visitation will be held on January 17, 2018 at the Millcreek Stake Center 10:00 a.m. - 12:00 noon at 4220 South Jeannine Drive (400 East), followed by the dedication of the grave at the Salt Lake City Cemetery. Our grateful family would like to thank the wonderful people at Mountain Land Physical Therapy & Rehabilitation, Holladay Healthcare Center, Silverado Healthcare, and Danville Support Services. Their kindness and dedication made this difficult time bearable for us.

Maureen Egli Nelson (85) was born on March 2, 1932 in Salt Lake City, Utah to Theodore Lambert Egli and Garnet Irene Llewellyn. She passed on January 9, 2018 at her home in Millcreek, Utah into the compassionate, loving arms of her savior and... View Obituary & Service Information

The family of Maureen Egli Nelson created this Life Tributes page to make it easy to share your memories.