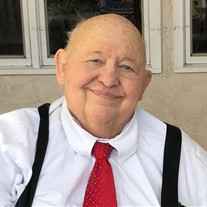 Maurice "Maury" Fowler Whitney, 79 passed away on October 26, 2017 in Orem, Utah. He was born December 12, 1937 in Tacoma, Washington to Dale Dyment Whitney and Alta Bertha Fowler. He married Keren Kaye Morrill on November 21st, 1962. Maurice loved cars and was an avid drag racer in his youth. After graduating from Lincoln High School in 1955, he made the trip to Provo Utah and attended Brigham Young University there. He worked his way through college, doing stints building Chevrolet cars in California and Boeing aircraft in Seattle. After serving a mission for the Church of Jesus Christ of Latter Day Saints in the south of Australia from 1959-1961, he graduated with a degree in Geography, completing the BYU Air Force ROTC program in 1964 and receiving an officer's commission in United States Air Force. After graduating from pilot training in 1965, he served in North Carolina, The Philippines, Vietnam, Taiwan, and Arkansas. While deployed to Vietnam during the war there he spent 430 days flying in country. He attained the rank of Captain and was awarded the Distinguished Flying Cross. He left the service in 1976, eventually retiring from the United States Postal Service in 2002. Throughout his life he was a faithful member of his church, holding numerous positions including High Councilman, Ward Clerk, Counselor in the Bishopric, and High Priest Group teacher for many years. He is survived by his wife Kaye Morrill Whitney, his children Nathan (Tina) Whitney, Aileen Whitney, Timothy (Lori) Whitney, Laurie (Sean) Johnson, Dana (Sonya) Whitney, Marcus (Toni) Whitney, Janell (Robert) Franke, Stuart (Esther) Whitney, Loren Whitney, and Ryan Whitney. He is also survived by his brother Duane Whitney and his sister LoRene Whitney, and by 27 grand-children and 2 great grand-children. He is preceded in death by his father and mother, and by his brother Dennis Whitney. Services will be held on October 31st, 2017 beginning with a viewing at the LDS chapel on 190 N, 800 West in Orem Utah at 9:30 am and Funeral services at 11 am. Burial with Honor Guard will be at 1 pm at Utah Veterans Cemetery & Memorial Park in Bluffdale, Utah.

The family of Maurice Fowler Whitney created this Life Tributes page to make it easy to share your memories.