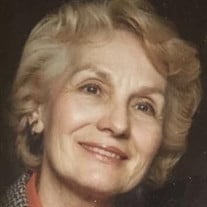 Our beautiful and loving Maxine Mortensen Crapo, 92, passed away on August 7, 2017 in Salt Lake City. Born March 26, 1925 to Beulah McKeithen and Andrew Mortensen in Austin, Texas. Married dashing WWII pilot James B. Crapo in Ft. Worth Texas in1944. Solemnized in the Salt Lake temple one year later. After the war, they completed their education at the University of Utah, Maxine earning a BA in English in 1948. After a year in Minnesota and the birth of their first child, they returned to Salt Lake City where they remained. Maxine was a devoted wife and mother of 6 children who all felt equally loved by her. Later she worked in Education and Law. She served faithfully in many LDS Church callings, including Primary and Relief Society President, Stake Board Leader and as a Temple Worker and a full-time missionary in the South London Mission alongside her husband. She was involved in the Utah Poetry Society for many years, serving in its leadership and winning several awards for her poems. She was also an accomplished singer and a worldwide traveler. Her husband, Jim died in 1998. In 2003, she married Kay L. Flinders and they spent seven enjoyable years together in Utah and California until his death in 2010. Survived by sisters Elise Green (Ron, deceased) and Karen Milan (Jim), children Michael Crapo, Jeris Johnson (J.D.), John Crepeau, Martin Crapo (Elaine), Bryan Crapo and Carol Gaskill (Rob), Kay's children Deborah Toy and Drew Flinders (Athena), 21 grandchildren and 29 great grandchildren. She loved and was loved by them all. Preceded in death by her husbands, sister Juanita and grandson Jack. Funeral services, Monday, Aug. 14, 12:00 Noon, LDS Cottonwood 5th Ward Chapel, 5913 S. Highland Dr., Holladay, UT 84121. Viewings, same location, Sunday evening, Aug. 13, 6:30 - 8:30 pm and prior to the funeral, 10:30 - 11:30 am. Internment, Mountain View Memorial Cemetery, 3115 E. Bengal Blvd., Cottonwood Heights. Special thanks to her home caregivers, Liliana, Daniela, Graziela, Ana and Maria and her teams at Millcreek Hospice and the Lodge by Valeo.

The family of Maxine M Crapo created this Life Tributes page to make it easy to share your memories.

Our beautiful and loving Maxine Mortensen Crapo, 92, passed away...