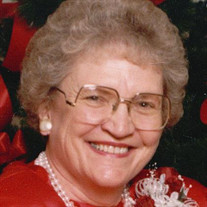 May Messervy Johnson, 86, passed away on Oct 6, 2016, at the home of her daughter, Aline Johnson Hardman , in Menan, Idaho. She was born on a farm near Idaho Falls on Oct 10, 1929 to Willard Urwin Messervy and Nora Melissa Frew Messervy. She married Ross Glen Johnson in the Idaho Falls temple on April 10, 1953. She was the fifth and youngest child of Willard and Nora. She had five half brothers and sisters from her parents previous marriages. She grew up on River road just north of Idaho Falls and attended Fairview grade school in the Coltman area and Ucon High School. After High school she was a charter member of the Idaho Falls Business College and then worked for Decker Brothers in Idaho Falls for 5 years. She lived with her brother, Henry Messervy , until her marriage to Ross. They lived in Sandpoint, St Maries, Kamiah, Sugar City, and Rupert Idaho. May served in the Relief Society, Young Women and Primary organizations serving and blessing others with her strong testimony and beautiful smile. She was a temple worker in the Boise and Timpanogas temples. She is survived by seven of her eight children, Alan (Gwenda) R Johnson, Aline (Randy) Hardman; Lonna Johnson Mock; LuAnn (Jeff) Broadhead; Angela (Dennis) Doutre: Loa Joy (Jeff) Bowne; David (Vicki) N Johnson; And one brother, LaVon Gale Messervy of Huntsville, Alabama. She was preceded in death by her husband Ross Glen Johnson, daughter, Maylanie Johnson; her parents, and three siblings: Don Carlos Messervy, Golda Etta Messervy Vail, and Henry Alva Messervy. The funeral services will be held October 15, 2016 in the Menan, Idaho, Stake Center, 689 N. 3600 E; at 10:00 AM with a viewing starting at 8:30. Interment will be at the Rupert Cemetery with a graveside service at 3:30 PM that same day.

May Messervy Johnson, 86, passed away on Oct 6, 2016, at the home of her daughter, Aline Johnson Hardman , in Menan, Idaho. She was born on a farm near Idaho Falls on Oct 10, 1929 to Willard Urwin Messervy and Nora Melissa Frew Messervy. She... View Obituary & Service Information

The family of May Messervy Johnson created this Life Tributes page to make it easy to share your memories.