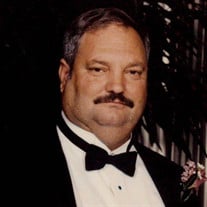 Merlin was born September 22, 1946 in Springdale, UT to Lawrence & Thelda Snyder Gifford. He spent the 1st year of his life on Kolob where his dad was on fire watch. His dad was in the military so they moved around alot. He lived in Springdale and St. George UT, Salinas, Seaside and Castorville, CA Oklahoma City, where he was baptized at 8 years old and Lawton OK. The family spent 3 years in Germany returning the year he started high school. He graduated Hurricane High School in 1966 and immediately left on his mission to the Eastern Atlantic States. He returned honorably in 1968 and Joined the Army. He was a Ranger and a member of the Special Forces. He graduated from jump school and was a distinguished honor graduate. He left the military in September of 1971. In October 1971 he met his Eternal sweetheart JoAnn Huish. They were married in the St.George Temple on December 17, 1971. Together they had 8 children. Merlin worked in construction, was a mining assayer and an OTR truck driver. Merlin loved the outdoors: hunting, fishing, camping… he often said he could eat fish every day of his life. He was a Star Trek, Star Wars and Stargate fan. He loved football and tennis lettering in both in high school. He loved to cheer on his favorite football teams, Go Raiders, Go Cougars. Merlin and JoAnn spent many summers on the Arizona Strip visiting Penns Valley and camping on Kolob with their family where they would fish and have fish fry’s. He enjoyed talking on the ham radio and had his H.R. license. Merlin graduated from Dixie College with his associates degree and SUSC his bachelors degree. Merlin was an active member of the Church of Jesus Christ of Latter Day Saints where he held many positions including: Ward Secretary, Elders Quorum President, Sunday School President, Gospel Doctrine Teacher, Priest advisor and taught the 7-8 year olds with JoAnn. He loved working with the youth. Merlin and JoAnn served as ordinance workers in the St. George Temple for 1 year. After that he returned to truck driving where he drove for his son John. JoAnn enjoyed being able to go with him. After getting off the road he taught school in a Native American School on the 9th and 10th grade levels. In 2011 they moved to Cedar City where they enjoyed their family and raised chickens and Merlin was often found puttering around the yard. In 2019 they moved in with their son, John and his family in Saratoga Springs, UT due to his declining health. In October 2021 he went in for pancreatic cancer surgery where they took half of his pancreas and his spleen. They weren't able to remove all of the cancer and his health continued to decline. On May 14th 2022 he returned to his Father in Heaven. He passed peacefully surrounded by his family at 9:12 am. Merlin is survived by his wife JoAnn, HIs children John (Cindy), Downna (Stacey), Taresa, Jarom (Michelle), Joshua (Breckan), Calleen, Cherri (Joe) and Joseph (Ashlyn). 22 grandchildren, 2 great grandsons and 1 great granddaughter due in June and his mother Thelda Gifford. He was preceded in death by his father Lawrence, older brother Larry and his younger sister Amelia. The family wishes to thank the Intermountain Home Care and Hospice for their loving care of Merlin. A special thank you to Kim Koenig for all the hours she spent and all the phone calls she answered. Thanks for being the best nurse ever!

Merlin was born September 22, 1946 in Springdale, UT to Lawrence & Thelda Snyder Gifford. He spent the 1st year of his life on Kolob where his dad was on fire watch. His dad was in the military so they moved around alot. He lived in Springdale... View Obituary & Service Information

The family of Merlin A Gifford created this Life Tributes page to make it easy to share your memories.