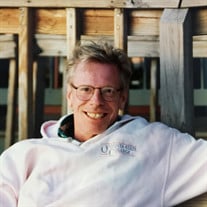 Michael Barry Clarke, born on Staten Island in 1942, passed away in Salt Lake City on December 10th, 2019. He is survived by his sister, Valerie Beebe and his son, Harry. Michael’s life didn’t intersect with anyone else’s without leaving an imprint. From military school to St. Bonaventure; from New York to Hawaii, then Washington, D.C. (where he spent most of his adult life until moving Salt Lake City to be near his son). Everyone who ever met him remembers him. He taught college level psychology courses and developed real estate. He was passionate about golf and loved to be by the water. He captivated, bewildered and entertained strangers and those close to him for decades, often telling unbelievable stories that only later always turned out to be true. Moments and memories were important to him. His life was not quiet or submissive. He loved learning and as ready as he was to offer an opinion, he was more eager to hear a rebuttal and drink it in. He shepherded many through the twelve steps of Alcoholics Anonymous and actively inspired many to overcome addiction. He credited Ann Cochran (his third wife) with helping him overcome his addiction and at the end of his life felt blessed by her presence and that of Judy Cohen (his first wife). He joked that if they were around at the end, he must have done something right. Number one on his list of people, places and things he loved was his son. Shortly after his birth his father remarked to others, “he talks about that boy as if nobody else ever had a baby!” He moved to Utah for the last few months of his life to be close to him and his family. Michael was visiting Kansas City when his first grandchild was born there and he was in Salt Lake City when his last grandchild entered the world. He loved them very much and adored his daughter-in-law, Kathleen, whom he described as perfect in every way. Toward the end of his life, he was excited to see his father, James Clarke, and his mother, Jane Snyder, again. A big fan of the unannounced drop-in, many will miss Michael’s surprise visits. Until we are reunited, his enthusiasm for life and warm touch remain with those he left behind. His memorial service will be held at 2150 Pointe Meadow Dr, Lehi, UT 84043 on January 18th at 10am. In lieu of flowers or donations, please send any memories to [email protected] — anything you are willing to share will be treasured.

The family of Michael Barry Clarke created this Life Tributes page to make it easy to share your memories.

Michael Barry Clarke, born on Staten Island in 1942, passed away...