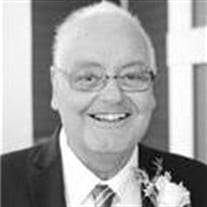 1950 ~ 2016 Michael George Smith, 65, our loving husband, father, son, brother, grandfather and friend succumbed to esophageal cancer at his home surrounded by his family, on March 12, 2016. Michael was born August 18, 1950 in Logan, Utah to George and Darla (Anderson) Smith. When he was a young boy, his family moved to Rupert, Idaho. He helped his father and family homestead a farm, where he worked and milked cows until he graduated from Minico High School in 1968. He then attended Ricks College in Rexburg, Idaho. He served a mission for the LDS church in the South Eastern United States mission from 1969-1971. He met and was married to Irene Sanders, from 1972-1997, with whom he had 5 children. Michael had a variety of careers as a successful farmer, a financial planner and most recently working in real estate in Mexico where he met his loving bride, Luzma. Michael loved the warm ocean air and thought of his beloved Playa Del Carmen as his 'heaven on earth'. Michael is survived by his wife, Luzma, his children, Joshua Smith, Sena (Chris) Reed, Summer (Don) Adamson, Scott (Heidi) Smith, and Heather (Todd) Fitch and eleven loving grandchildren. He is also survived by his brother, Brad (Debbie) Smith, sisters, Sandra (Michael) Berg, Shelley (Jack) Harman and Lori (Brent) Norton, nieces, nephews and many friends. He was preceded in death by his parents and grandparents. Michael loved his children and grandchildren deeply and enjoyed supporting them as their biggest fan in their various activities. He loved sports of all kinds, especially watching football and being involved in his fantasy football league with his sons for many years. Michael loved being around people and was often thought of as the life of the party and was known for his great laugh. He liked to cook, enjoyed gardening and had a love of music. A viewing will be held on Wednesday, March 16th 9:30 a.m. at the Draper Meadows Stake building (573 E 13800 S) with funeral services to follow at 11:00 a.m. Interment will be at the Rupert, Idaho cemetery. -

The family of Michael George Smith created this Life Tributes page to make it easy to share your memories.