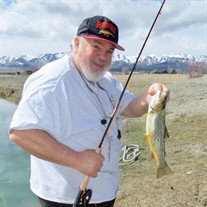 Michael Patrick Stockdale was born March 4, 1951 to Leonard Alfred Stockdale and Anna Nell Marchello in Denver, Colorado. Learning from his own father, Mike grew up with a love of hunting and fishing. Even as a child, he was often found pulling his wagon of bait (usually worms he dug up himself or pieces of hot dogs or smashed-up bread balls) and poles to the nearest fishing hole. At the young age of 16, in San Jose, California, Mike met the love of his life—the cute southern belle, Diana Helena Sherrod. Putting his hunting and fishing skills to the test, he quickly snagged the heart of the girl who called herself Dianne. On January 25, 1969, the 17-year-old Mike and 15-year-old Dianne married in Reno, Nevada. Afterward, they went back to San Jose, California, to start their lives together as husband and wife. Mike became a father later that year when his oldest son was born. Then in Modesto, California, in 1970, 19-year-old Mike purchased his first house for his wife, son, and new baby on the way. Over the next 12 years, Mike and Dianne had 7 more children. Even when their doctor told them he’d stop delivering their babies if they had any more, they kept going until they reached the nice round number of 8 children: 4 boys and 4 girls. They just cherished children too much to stop any sooner. Mike deeply loved his wife and children and worked hard to support them. While his work sometimes required him to be gone from home for days at a time, Mike always made time to have fun with the family. Each of his children has treasured memories of target shooting, hunting, and fishing with Dad. In 1989 Mike attended his oldest child’s wedding and happily became a father-in-law and grandfather for the first time. He couldn’t wait to teach his new grandson how to fish! Over the years, Mike attended weddings for all of his children and even for some of his grandchildren. And as every grandchild came, he excitedly looked forward to spending time with them. (He even changed some of their diapers!) As soon as they were old enough to hold a fishing pole, Mike happily planned fishing trips that included his grandkids. Many of them even got to go hunting with Grandpa. Mike had a huge heart and a great capacity to love. He was also a man of God. He taught his family to be spiritual, leading them in becoming members of, and attending, the Church of Jesus Christ of Latter-Day Saints. He always tried to make himself available to give blessings, conduct or attend baptisms, and contribute to the spirituality of his family or others in need. Over the years the Stockdale family went through many difficulties, but through it all, Mike remained the eternal optimist. Whether facing his own or others’ serious illness, financial turmoil, or worse, he always remained positive and was always willing to lend a helping hand, a listening ear, a shoulder to cry on, or anything else that might help others. He remained his family’s rock to the end of his life. On Tuesday, September 1st, 2020, Mike passed away at Strawberry Reservoir in Wasatch County, his favorite lake in Utah. And he was doing his favorite thing in the world: fishing with family. Mike is survived by his wife of 51 years Dianne and his children and their spouses: Michael Stockdale Jr. (Crista Stockdale), April Hiatt (Tyson Hiatt), Jen Suddreth(James Suddreth), Jarod Stockdale (Deborah Stockdale), Kelly Condie (Roger Condie), James Stockdale (Dawn Stockdale), David Stockdale (Teresa Stockdale), and Melissa Martinez (Gamaliel Martinez). Through them he has 31 grandchildren, several grandchildren-in-law, and 5 great-grandchildren. They are Michael Suckow (Oliver), Allison Merrill (Nathan, Grace, and Luke Merrill), Elizabeth Anderson (James Anderson), Jessica Flinn (Kurtis, Annie, and Charles Flinn), Emily Suckow, Daniel Suckow, Kiera Sutcliffe (Trazer Sutcliffe), Braxton Hiatt (Darcy Hiatt), Olivia Hiatt, Brooke Caravela, Christian Suddreth, Taylor Gault (Kyle Gault), Hunter Stockdale, Emma Stockdale, Kade Stockdale, KC Condie, Amanda Estes (Josh Estes), Jema Condie, Nicole Condie, Cullen Stockdale, Sophia Stockdale, Lily Stockdale, Harrison Stockdale, Isabella Stockdale, Grayson Stockdale, Brody Stockdale, Wyatt Stockdale, Penelope Stockdale, Ryker Dalton, Mason Dalton, and Katie Dalton.

Michael Patrick Stockdale was born March 4, 1951 to Leonard Alfred Stockdale and Anna Nell Marchello in Denver, Colorado. Learning from his own father, Mike grew up with a love of hunting and fishing. Even as a child, he was often found pulling... View Obituary & Service Information

The family of Michael Patrick Stockdale created this Life Tributes page to make it easy to share your memories.