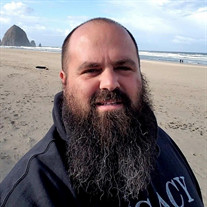 Mikal ‘Patrik’ Vaughn 08/22/1975-10/06/2021 Pat was born in Missoula Montana to Kathyrn Joyce Brown and Kenneth Vaughn. His parents later divorced and in 1981 his mom met the man he would call dad for the rest of his life in Boise, Idaho. William (Rocky) Rhodes and Kathyrn were married in April 1982. Later that year, the family moved from Boise to West Valley City, UT. Pat attended school in West Valley City, UT and later moved to Coeur de’Alene Idaho until the untimely passing of his beloved mother in 2001. In April of 2002 Pat moved to Southern Utah and started a job working for Zion’s National Park. While living in Southern Utah, he met and fell in love with his first wife, Kim and her son Damian. Together Pat and Kim had their amazing son Tristan. They later divorced and Pat met his second wife Regan and her children Maddie and Damon. Together they had their two sons, Jaxon (Bentley) and Nathan. Pat and Regan later divorced. Pat’s boys were the light of his life and his reason for living. Pat was everybody’s best friend and brother. He had a heart of gold, a sense of humor that could make anyone laugh, wit that no one could compete with, and he was one of the most stubborn men you ever did meet. His love of his friends and family couldn’t be measured. Pat enjoyed riding his Harley, playing disc golf, and spending time with the people he loved. He had recently taken up scuba diving and was looking forward to the day he would be able to dive in the ocean. Pat had more friends than anyone could possibly count and many he considered his brothers. Lifelong friends; Martin Masters, John Oliver, Jason Dibello, Andy Manzanares, Mike Peterson, Dale Linwood, & Jason Wilcox. His brothers he met along the road of life, Curtis Lowery, James Valderrama, Gareth Houston-McMillan, and many more. If I left anyone out, I apologize, it wasn’t intentional. Pat is survived by his children; Tristan Vaughn, Jaxon ‘Bentley’ Vaughn, & Nathan Vaughn, step-children; Maddison Lang & Damon Lang, his dad; William ’Rocky’ Rhodes, his sisters; Eryn Vaughn, Tannis (DJ) Martinez; & Maida Vaughn, his brother; Tyson (Amber) Rhodes, his grandmother; Lela (Roger) Cousineau, his favorite aunt; Patti Lynn (Ven) Savage, nephews; Arik Vaughn, Alix Vaughn, Chad DeVaughn, Jordan Rhodes, Dakota Rhodes, Dustin Rhodes, & Deizel Martinez, his “favorite” niece; Avery Martinez, many cousins & many he considered nieces and nephews. He is preceded in death by his beautiful mother; Kathyrn Joyce Rhodes, his grandfather; Pat Brown, his grandmother; Maida Vaughn, his brother; Jason Rhodes, and his step-son; Damien Durand. Services are being held at the Stansbury Park Clubhouse on Clubhouse Drive in Stansbury Park, UT on Saturday October 16, 2021 from 1:30-5:00 PM. This is a non-smoking, non-drinking venue, so please be respectful. Additional information can be found on Pat's Facebook page.

The family of Mikal Patrik Vaughn created this Life Tributes page to make it easy to share your memories.