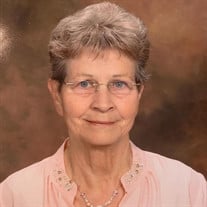 Mildred Elizabeth Perry- Litteral, 79 passed away on 27 February in Midvale Utah at Harmony Hills Assisted Living Facility. She was a former resident of Loveland, Ohio, Mount Pleasant, Moroni, and Manti Utah. Mildred was born in Stearns, Kentucky to Lewis and Edith Perry. Mildred married George Litteral in Owingsville, Kentucky August 10, 1960. George had three children from his previous marriage, Phyllis, Ed and Gwen. Mildred was 18, and now a mother to a six year old, and more like a big sister to the other two. Within two years of their wedding George & Mildred added to their family, Butch and David. July 24, 1961 and July 21, 1962 respectively. George & Mildred decided to wait for three years after which Steve was born July 16th 1965. There is a July theme here folks, if you haven’t caught on yet. It would be another five years before the stork would bring in the next baby basket, filled with this blonde baby boy, named Ronald. Another Boy! From the early days of marriage, Mildred was a stay at home mom, but as Gwen and the boys grew up, and entered school, Mildred entered the work force. She worked as a Printing Plant Inspector, Cake Decorator, Bakery Manager (including Mount Pleasant and Ephraim), and as a Campground Manager. Mildred and George both worked their tails off, to provide a better life for their children. Their work ethic and determination provided the inspiration for all of their sons. They raised their family in the church, and made sure they were good examples for their children and our community. Mildred was quite a singer, but too shy to join George in his singing groups. “We’re using our bible for a Road Map” was a favorite of all who heard them sing together. Mildred and George were explorers, longing for the open road, they provided opportunities for their family to go to locations some folks dream about. By the time the boys were grown, they had been in ~30 of the 50 states as well as Mexico and Canada. It wasn’t all about just having fun, it was about learning. Each trip provided an opportunity to visit Tribal Lands, Historical Sites, and learn about not only our culture, but others as well. Regarding education, Mildred grew up in the hills of Kentucky and Cincinnati. She knew what it was like to grow up poor, with hand-me down dresses, and second hand shoes. She instilled her life- lessons in each of her boys. While George didn’t put much stock in formal education, Mildred did. Mildred knew the value of an education and did her best to make sure they were all good students. Each of her four boys graduated from college and have also completed their master’s degrees and two of the four are nearly complete with their Doctorates. Mildred could not have been more proud of her son’s academic accomplishments. Mildred was also proud to be a Blue Star Mom (3 stars). Three of the boys would serve in the US Military and collectively provide over 60 years of service to this great nation. The youngest son would also go on to serve our community, (in a just as important role), as educator in public and charter schools. In their golden years, Mildred and George traveled the US. Meeting folks from all walks of life and making new friends along the way. She often talked about missing the camping her and George completed along their journey in life. Mildred was preceded in death by her husband George Sr., her Father, Lewis Perry, Mother, Edith Howard-Perry, Brothers Ronald Perry, Danny Perry and Sister Betty Perry-Hyde and Daughter-in-law Tina Litteral. She is survived by her four sons: 1SG (Ret) George (Butch) Litteral Jr., ( Michelle), CSM (Ret) David J. Litteral PhD (c),(Charlene), Steven L. Litteral PhD(c), (Alene), & Ron Litteral. Step Children: Phyllis Litteral-Rhinehart (Richard), Edward Litteral, and Gwen Litteral Brown. Seventeen Grandchildren: Brian, Tracy, Aimee, Jennifer, George (Russ), David ( DJ), Charles, Danielle, Nadine, Samatha, Andrea, Danny, Nicole, Brittney, Nick, Sarah and Kaylah. Nineteen Great-Grandchildren: Daylan, Ashton, Ryder, Krystina, Leylah, Bryson, Ava, Alexndria, Giuliana, Carter, Landon, Owen, Aspen, Elijah, Brooklyn, Anna, Elizabeth, Haley and Amy. Nephews: Mike Perry, Phillip Walker. Niece: Myra Perry-Ardo. 2nd “Litteral” Daughter: Jody Christensen. Due to Covid-19, Mildred will be laid to rest at the Manti City Cemetery with a small gathering of family and friends on Saturday March 6th. Viewing will be from 12:30 to 1:00 pm with the gravesite service starting promptly at 1:00 pm. A Memorial Service is planned for sometime mid to late June again given current requirements for Covid-19 protocols. The family would like to thank Harmony Hills Facility, especially Rachel, her CNAs, Ashley Damico, Olivia Hall, Cydney Varner, John Gerk and Hannah Poff as well as all the rest of the staff at Harmony Hills. Anna and Amber (hospice nurses) , both took wonderful care of Mildred in her last couple of years. Pearson Frank her Social Worker, who treated her like his own mom. Mildred’s LDS Home Teachers:Brother Brent and Sister Arlene Hatch. Mildred’s treasured friends: Elaine Hargeett, Phyllis Downs-Bake, Sandy Mortison, Beverlee Toone, The Farris family, The Lowe Family, The Shelly Family, and so many many others. Mildred wanted you all to know how much you were loved and appreciated. “Please share your memories and condolences at www.serenityfhs.com

The family of Mildred E. Litteral created this Life Tributes page to make it easy to share your memories.