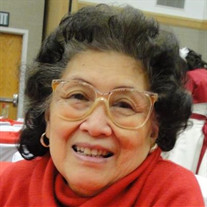 Mirian J. Chiang Navarro de Del Carpio passed away on February 20, 2017, in Provo, Utah. She was born on October 17, 1938, in Pacasmayo, La Libertad, Peru and was the eighth child of German Chiang Li born in Canton, China and of Eva Navarro Canevaro from Maynas, Peru. She was married to Juan E. Del Carpio Garcia in Lima, Peru on December 14, 1958. Mirian was a talented woman who placed her culinary and craft skills to the service not only of her family but of many others as well. She lived the first years of her childhood in Northen Peru, a place she dearly loved, and later moved to Lima where she joined her older sisters: Elena, Alicia and Esperanza. There, in August 1974, she joined the Church of Jesus Christ of Latter Days Saints with her husband and children and became an active and dedicated member of the Relief Society at the Lima III Ward in Santa Beatriz, Salamanca, Monterrico before finally moving to Springville, UT in July of 1999. Through the church fellowship she made many lifelong friendships and created many treasured memories. She left a positive impact on the people around her and will be remembered with love by all those she's helped and by her family. Mirian's love for her Asian ancestry was very noticeable and she has passed on that respect and appreciation to her children, grandchildren, and to her nieces and nephews. Mirian is survived by her lifelong spouse Juan E. Del Carpio and their children: Cristina, Pilar, Juan Carlos, Susana, Richard, Donald, Jose and Diana as well by as her grandchildren: Ryan, Patricia, Jaime, Josue and Daniel Franco; Diego and Valery Caballero; Cynthia, Melissa, and Alonso Prieto; Karen, Kristi, and Nathaly Del Carpio and her great-grandchildren: Emily, Matthew, Nicholas, Jean Pierre, Jeremy, Justin, Ailee, Destiny, Ezra, Gabriel and Noah. She is also survived by her sisters Nelly and Flora and her brothers Carlos and Jorge Chiang. She was preceded in death by her brothers Americo and Ramon, by her sisters Elena, Esperanza, and Alicia, and by her parents German and Eva. Her service and viewing will be held at the Church of Jesus Christ of Latter Days Saints, at 762 North 100 West in Provo, UT 84601 on February 25 2017; the viewing will start at 10:00 am and be followed by the funeral service and the burial at the Provo City Cemetery. We would like to give sincere thanks and gratitude to all the support received by Letecia Pereira-Franco and family, Jorge Chiang and family, Carlos Chiang and family, Freddy Sun and family, and to Bishop A. Perry and all the members of North Park 4th Ward.

Mirian J. Chiang Navarro de Del Carpio passed away on February 20, 2017, in Provo, Utah. She was born on October 17, 1938, in Pacasmayo, La Libertad, Peru and was the eighth child of German Chiang Li born in Canton, China and of Eva Navarro... View Obituary & Service Information

The family of Ms Mirian J Chiang-Navarro De Del Carpio created this Life Tributes page to make it easy to share your memories.