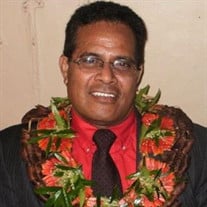 Mokeni Taufahema Folau, 58, passed away peacefully at his home in West Jordan City, Utah on Sunday, January 14, 2018. He was surrounded by his family and close friends. Mokeni was born March 28, 1959 in Navutoka, Tonga to Filisione Masita Taufahema and Mele Mavae Folau (Nomuka). He married Pilimilose Tangifua (Talafo’ou) on March 8, 2000 in Nuku’alofa, Tonga. Mokeni attributes so many of the blessings in his life to his membership in the Church of Jesus Christ of Latter-Day Saints. He loved teaching the gospel and was considered a friend to both young and old. Mokeni was an advocate for education and began teaching at his alma mater, Liahona High School. He extended his teaching opportunities to various Middle Schools in Ha’ateiho/Pea, Kolonga, Mu’a, Vaini and Ha’atu’a. He had a keen interest in Computer Technology which led him to earning a Bachelor of Science Degree in Electronic Engineering Technology in September 2000. He went on to pursue a Master of Science degree in Information Systems and Management. Music was a big part of his life and he was very skilled at playing the guitar, ukulele, and the keyboard. He passed this passion on to his children. Mokeni is survived by his loving wife, Pilimilose and his children, ‘Ana Fe’aomoehala (16), Filisione Masita Taufahema (15), ‘Esafe Ma’umatapule (13), Jair-Master Taufahema (12), Morgan Taufahema (11), Sione Tangifua (9), Christopher Jordan (8), and Laura Primoarney (5). He was preceded in death by his father and grandparents. A viewing for Mokeni Taufahema Folau will be held on Saturday, January 27 from 8:00am until 11:30am at the West Jordan Utah Stake Center on 2666 West 7000 South, West Jordan, UT 84084. The funeral service will precede at 12:00pm and burial to follow at the West Jordan City Cemetery (1300 West 7800 South). The Folau family offer their deep gratitude and appreciation to Dr. Laura Ann Lambert and the staff of UMass Memorial Medical Center in Worcester, MA; to Dr. Sharma and Dr. Gilcrease and staff from Huntsman Cancer Institute at the University of Utah, and to Angels Crossing Hospice Care. Thank you for the wonderful care and support. Funeral arrangements were provided by Peni and Shelly Malohifo’ou and the Serenity Funeral Home.

Mokeni Taufahema Folau, 58, passed away peacefully at his home in West Jordan City, Utah on Sunday, January 14, 2018. He was surrounded by his family and close friends. Mokeni was born March 28, 1959 in Navutoka, Tonga to Filisione Masita... View Obituary & Service Information

The family of Mokeni Taufahema Folau created this Life Tributes page to make it easy to share your memories.