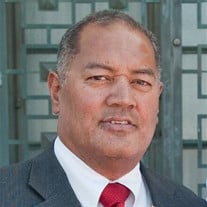 Monte Christo Tukumoeatu Sr., 59, passed away on June 29, 2015 at his home in Magna, Utah after a year long battle with cancer. Monte was born August 29, 1955 in Nuku'Alofa, Tonga to parents Mafi Kakau Langi and Tonga Hihifo Tukumoeatu. He is the oldest of seven children. Monte married 'Ofa Alilia Fifita Sitake in the Oakland, California LDS Temple on July 10, 1982. In 1962, Monte's family moved to Pago Pago, American Samoa. He learned to speak the Samoan language fluently and loved the culture. When he was 14, Monte moved to Utah to pursue an education and graduated from Granger High School (class of '72). He played safety on the high school football team and his passion was music. Monte was a very capable guitar, bass, and drum set player who loved playing in community cover bands in his younger years. Monte was a dedicated, life long member of The Church of Jesus Christ of Latter Day Saints. He served a 2 year full time mission in the Nuku'Alofa, Tongatapu Mission. He served within various positions of the church including Home Teacher, Elders Quorum President, High Priest Group Leader, and High Councilman in the Magna, Utah Stake. In 1986, Monte began what would become a 29 year career with Northwest Airlines and Delta Airlines. He was an employee until he passed. During his airline career, Monte was stationed in San Francisco, Memphis, Minneapolis, Las Vegas, and Salt Lake City. He loved the airline family he worked with and was known among co-workers as a man with a big heart and warm smile. Monte was a hard working family man who always believed in putting the family first. He often worked multiple jobs simultaneously to support them and was sometimes forced to temporarily move away from his family to keep his job. He is survived by his wife, 'Ofa Alilia Tukumoeatu. Father, Tonga Hihifo Tukumoeatu. Children: Tonga Hihifo Tukumoeatu Jr., Monte Christo Tukumoeatu Jr., and Aurelia Selai Tukumoeatu. Grandson, Hyrum Tonga Tukumoeatu. Daughter-in-law, Sharlene Tukumoeatu. Siblings: Seifagafaga Tukumoeatu, Batchelor Tukumoeatu, Pauline Sanft, and Pago Pago Tukumoeatu. He is preceded in death by his mother, Mafi Tukumoeatu and his sisters, Fipe Tafia Tukumoeatu, and Pauline Tukumoeatu. All funeral services for Monte will be held at the LDS Chapel located on 3084 South 8400 West, Magna, UT 84044. The viewing will be on July 9th from 6:30-10:30 pm. Family prayer meeting July 10th from 8:00-10:30am. The funeral service will be held on July 10th from 11:00-12:00pm. The graveside service will begin at 1:00pm, July 10th at Redwood Memorial Mortuary and Cemetery located on 6500 South Redwood Road, Salt Lake City, UT 84123. The Tukumoeatu family would like to thank all family, friends, church leaders, and doctors who have supported Monte and his family through these trying times. Please share memories and condolences at www.serenityfhs.com Services are under the direction of Peni Malohifo'ou of Serenity Funeral Home

Monte Christo Tukumoeatu Sr., 59, passed away on June 29, 2015 at his home in Magna, Utah after a year long battle with cancer. Monte was born August 29, 1955 in Nuku'Alofa, Tonga to parents Mafi Kakau Langi and Tonga Hihifo Tukumoeatu. He is... View Obituary & Service Information

The family of Monte Christo Tukumoe'atu Sr created this Life Tributes page to make it easy to share your memories.